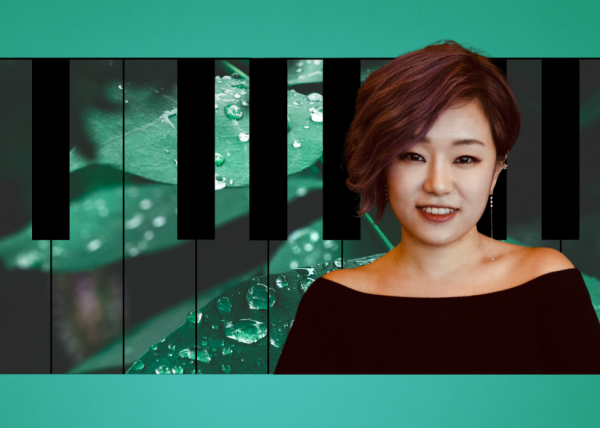 SANDUSKY, OH – Due to a personal injury, the Firelands Symphony Orchestra concert originally featuring guest artist Martín García García will now be headlined by Byeol Kim on piano. Ms. Kim competed at the 2021 Cleveland International Piano Competition, where she was awarded Third Prize, Female Composer Prize, and Armchair Jury Prize. She has also appeared with orchestras around the world, including Cleveland Orchestra, Paderewski Pomeranian Philharmonic in Poland, Pohang Philharmonic Orchestra in Korea, Rochester Philharmonic Orchestra, and others.

Ms. Kim will perform Tchaikovsky’s Piano Concerto No. 1 at FSO’s season finale concert VENTURE INTO NATURE on Sunday, April 24 at 4:00 p.m. at Sandusky High School Auditorium. General admission tickets for this concert are available for $25 at firelandssymphony.com/tickets or by calling the FSO office at 419.621.4800 (Monday-Thursday, 9 a.m. to 5 p.m.).

This concert is made possible with generous funding from: Randolph J. & Estelle M. Dorn Foundation (Principal Benefactor), Mylander Foundation (Season Sponsor), Firelands Regional Medical Center (Gold Sponsor), Sandusky Concert Association (Guest Artist Sponsor), and Ohio Arts Council. Student tickets for youth are complementary, as well as for college students with a valid student I.D. at the time of purchase. For these special ticket offers, please call the FSO office or claim at the door on the day of the event.

Maestro Carl Topilow has created a sweeping program of songs that evoke the perceptions of nature, from the forest to the sea. This classical concert is a musical trek through the wonder and beauty of the great outdoors, evoking senses of wonder, splendor, and adventure of the world in which we live.

“There’s no better way to close our season than with a concert that reminds us to take time and enjoy the constant beauty of nature that has always surrounded us – especially with the coming of Spring and society’s gradual return to ‘normal life’ following all the previous barriers due to the pandemic,” said FSO Executive Director Tricia Applegate.

The program begins with the full orchestra performing the sweeping melodies of Copland’s An Outdoor Overture. Guest artist Byeol Kim, an accomplished and multiple award-winning pianist, will then join the orchestra to perform Tchaikovsky’s Piano Concerto No. 1.

As of April 1, the FSO is no longer requiring COVID-19 vaccination or testing checks, and face coverings are also OPTIONAL for all guests. The doors open one hour prior to the performance. Seating is first come, first serve. Audiences are encouraged to park in the rear parking lot of Sandusky High School and enter through the athletic entrance. Handicap parking and entry is available in the main, front lot and entrance.

Astral Pianist Byeol Kim has earned a reputation for her “ingeniously colorful imagination with stage charisma” (Agata Nowakowska), remarking “hushed performances as an operatic singer on the piano” (Cleveland Classical).

She is a top prizewinner of Cleveland International, Paderewski International, Washington International, and others. Her recent appearances with the orchestra include the Cleveland Orchestra, Paderewski Pomeranian Philharmonic in Poland, Pohang Philharmonic Orchestra in Korea, Rochester Philharmonic Orchestra, and others. She has performed worldwide, including Carnegie Hall’s Weill Recital Hall, Teatro Civico in Italy, Flagey in Belgium, Petit Palau Hall in Spain, and Koerner Hall in Toronto. Also a sought-after chamber musician, she collaborated with Cho–Liang Lin, Jian Wang, Yura Lee, Escher String Quartet, and the Rolston String quartet.

Ms. Kim is passionate about including lesser-known composers in her programming, seeking to broaden the spectrum that music embodies in society. In her US debut, she performed the Piano Concerto by female American composer Amy Beach with the Rochester Philharmonic Orchestra and was acclaimed to “impress with energy and freshness” (The Women’s Philharmonic Advocacy). Ms. Kim performs as a guest artist with Fifth House Ensemble in Chicago, where she is keen to adapt to new formats of chamber music with the goal to communicate with a larger audience.

Ms. Kim received her Artist Diploma as the first candidate ever to be accepted by Jon Kimura Parker at Rice University and holds graduate degrees at Eastman School of Music and Northwestern University. Her creative artistry not only shines through her performances but is also reflected in her projects: recording her insightful repertoires “The mid-length fantasies and literature,” conducting Mozart Piano Concertos from the piano, and visual arts projects. With her exquisite visions, she is gaining more attention as a leader of the new generation.

The Firelands Symphony Orchestra (FSO) is a non-profit regional arts organization sustained by strong community support and patron loyalty. The FSO mission is “enriching lives through music.” The organization achieves its mission by engaging audiences with outstanding live performances, cultivating appreciation for musical excellence through education and community engagement while maintaining high standards of organizational and financial stability. Visit www.firelandssymphony.com.