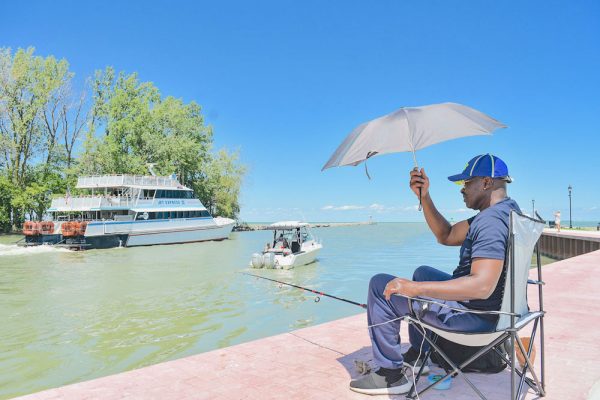 John Congress of Lorain has been fishing in Port Clinton for years, and he said he loves the new Port Clinton Walkway that allows him to get close to the water. He recently caught several catfish from the Walkway. (Photos by Sheri Trusty)

When the Port Clinton Walkway opened along the Portage River in downtown Port Clinton this summer, it fulfilled “quite a few people’s dreams,” according to Safety Service Director Tracy Colston. The $2.3 million project created an approximately 16-foot-wide walkway that hugs the riverside, giving ample space for walkers and fisherman to enjoy the water like they never have before.

“This was a long time coming. I was born and raised here, and it’s amazing. I walk it every day, and I’m in awe every day,” said local resident and business owner Kristina Tilson. “What a great addition to our already expanding waterfront.” 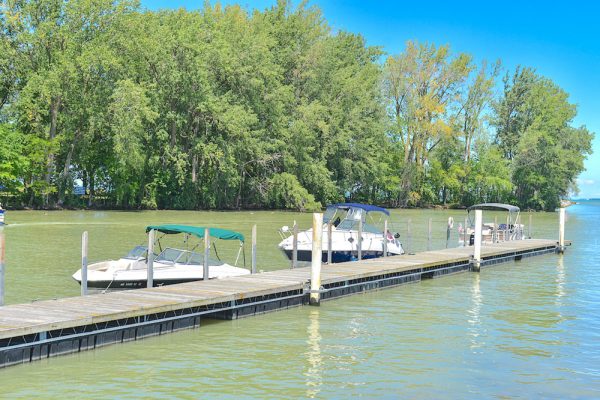 Boaters can dock along the Port Clinton Walkway for free and take a short walk to downtown Port Clinton to eat and shop, as well as listen to the live bands.

Colston said the project was funded by an ODOT grant and had been in the planning stages for years.

“Previous mayors wanted it, but Mayor Mike Snider kept pushing it,” Colston said. “It’s a tremendous asset to our city.”

Docks were installed recently at the Walkway. Docking is free, but overnight stays are not permitted.

“You can park your boat and go downtown to shop and eat,” Colston said. “It will fit five or six boats.”

The project is not completely finished. Colston said the contractor has a punch list of last-minute improvements that will be made once the back-ordered railing for the handicap ramp arrives.

“They need to tidy some things up,” Colston said. 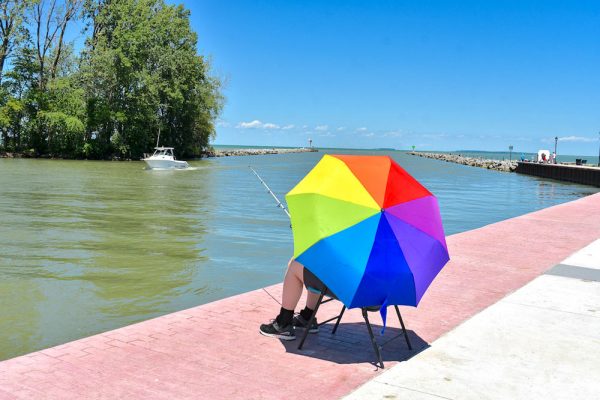 Robin Kapostasy of Arcadia pretends to fish so her husband, Gary Kapostasy, won’t know she’s caught on a snag. She didn’t tell him because she wanted him to keep fishing, and she was still having fun enjoying the view from the new Port Clinton Walkway.

Those last-minute tasks are not keeping locals and tourists from enjoying the walkway. John Congress traveled from his home in Lorain on Monday, July 25 to cast a line in the river and caught four catfish in a short time. He has been fishing in Port Clinton for years and was impressed with the improvements the Walkway brought to the riverside.

“I love it. It gets you closer to the water. You can sit right up by the water and don’t get as many snags,” Congress said. “It’s a long drive from Lorain, but it’s better fishing and the water is clean.”

Gary and Robin Kapostasy of Arcadia were fishing on the walkway near Congress. Gary had caught a couple of fish, but Robin wasn’t doing quite as well. 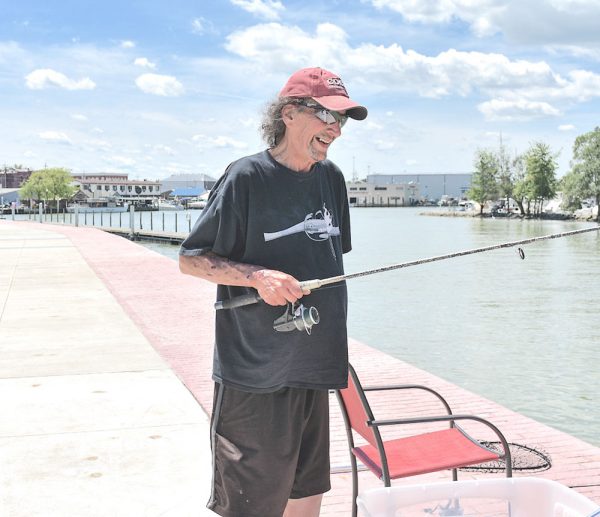 Gary Kapostasy and his wife, Robin Kapostasy, of Arcadia took a one-day vacation to Port Clinton and spent most of the day fishing on the new Port Clinton Walkway.

“I spent the last hour and a half caught on a snag. My husband doesn’t know because I want him to keep fishing,” she said.

Nevertheless, they were both having fun enjoying the sun and the passing boats. Gary is a retired educator, and Robin is a minister at a Fostoria church. They were in Port Clinton for an overnight stay and spent most of the time on the Walkway.

“Monday is a pastor’s day off, so we took a one-day vacation here in Port Clinton,” Gary said. “The walkway is wonderful.”

Colston has heard that kind of positive feedback again and again.

“People love it. I see a lot of tourists use it, and locals are taking advantage of it. It connects to the walking path that goes to the Port Clinton Lighthouse,” Colston said. “The Walkway offers one of the best views in all of Ohio. Where else can you get a view like that, with a river and lake side by side?”