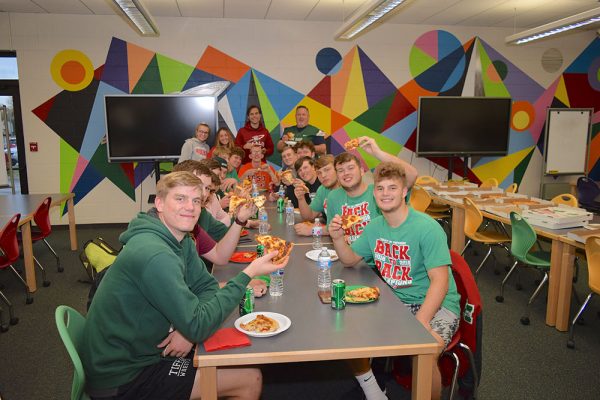 The seniors on the Oak Harbor football squad celebrated Friday’s victory over the Port Clinton Redskins, 48-8, with plenty of pizza on Monday evening, thanks to a bet between Port Clinton Mayor Mike Snider and Oak Harbor Mayor Quinton Babcock. The losing mayor agreed to wear the rival team’s colors, and ferry 25 pizzas to the seniors of the winning squad. Joining the football players for a slice of pie from Bell Mell’s Tavern & Pizza at the far end of the table at Oak Harbor High School are Mayor Babcock, left, and Mayor Snider. (Photo by D’Arcy Egan) 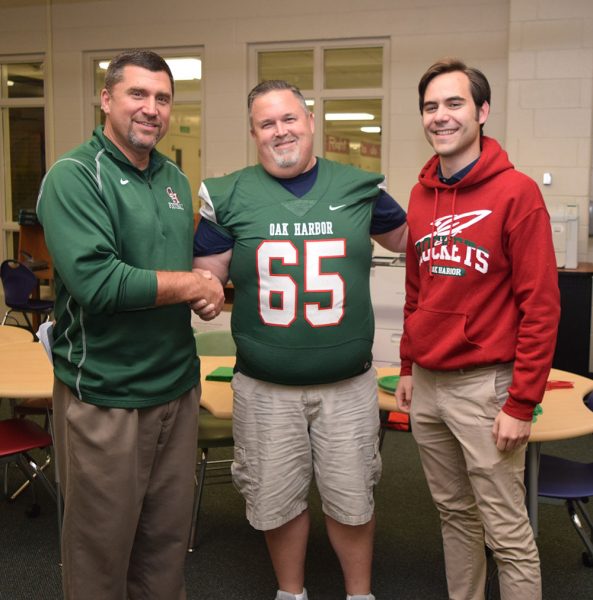 Mayor Quinton Babcock (right) of Oak Harbor and Mayor Mike Snider (center) of Port Clinton kicked off a new tradition at Friday’s epic football clash between the Oak Harbor Rockets and the Port Clinton Redskins. The mayors bet pizzas on the outcome of the game. While Oak Harbor had the edge this year, seeking to finish off an undefeated regular SBC Bay Division season, Mayor Snider still remembers beating Oak Harbor when he was the Redskin’s center many, many years ago. Snider had to wear an Oak Harbor jersey and reward the Rocket’s senior players with pizza, including Coach Mike May (left). Of course, they were Snider’s favorite pies, supplied by Bell Mell’s Tavern & Pizza of Port Clinton. (Photo by D’Arcy Egan)