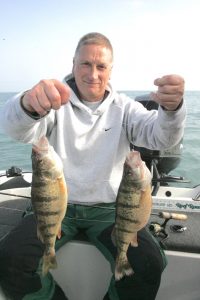 The Lake Erie yellow perch fishing has been good when the weather cooperates. Catchers have been reported off the Marblehead Lighthouse.

We are going to start off the fishing report with a little football this week. On Friday night, Port Clinton played against Perkins in Sandusky. It was a tough week for me since I live in Sandusky and my son plays for Perkins — and all my businesses are in Port Clinton.

I want to give a big congratulations to the Port Clinton football team on their win! As the Redskins advance on the next step towards the state championship, we will be rooting for you!

Now on to the fishing. We haven’t really talked about the night walleye fishing yet, but the after dark fishing while casting crank bites from the shoreline areas has been the best it has been in years. So many areas have been producing nice sized walleyes.

The baits of choice have been little lip crankbaits, like the Smithwick Perfect 10, and Rattling Rogues. Some of the best spots have been public access places like behind the police station in Sandusky, Catawba State Park and some private access spots, but anglers everywhere have been reporting great catches.

Yellow perch fishing was great at mid-week, with a lot of limits being caught. The waters in between Marblehead and the Cedar Point Foghorn have been the best place to dunk emerald shiners minnows, which are plentiful now.

Walleye fishing has mostly been anglers out trolling, trying to catch “the big ones” between Huron and Lorain that could win big prizes in the Fall Brawl or Walleye Slam fishing derbies, which run through Sunday, Nov. 28. The best way to catch these walleye are trolling Bandit Lures set back 40 to 80 feet with no weights or by trolling Bandits set back 80 to 110 feet with 2-ounce weights.

Most of the walleye being caught higher up in the water depths.

Good luck to all that are in the derbies or just out fun fishing. Until next week, stay safe, have fun and keep a tight line!