High water levels have plagued the Ohio shoreline and Lake Erie Island areas of Lake Erie this year. The National Oceanic and Atmospheric Administration (NOAA) has forecast that Ohio residents — and avid ice fishermen — may get a break when February rolls around.

The NOAA forecast last week announced by the Great Lakes Environmental Research Laboratory is that this year Lake Erie will get its maximum cover of an 80% during the last half of February. That will essentially help to mitigate shoreline erosion and damage around Lake Erie. Based on an experimental model’s results, NOAA GLERL projects the Great Lakes overall ice cover this winter to be around 47%. That’s almost 9% below the long-term average of 55.7%. Here’s the preliminary projection broken down by lake:

With near-record high water levels in the Great Lakes this year, the question of how ice and water levels will affect coastal communities in the months ahead looms large.

Traditional thinking is that high ice cover forms a “cap” that leads to decreased evaporation of lake water. NOAA experts find the relationship between ice, evaporation, and water levels is more complex than that. 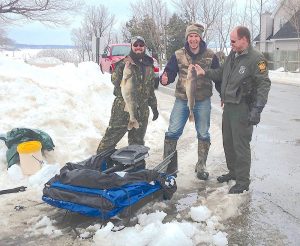 Despite the late arrival of winter, The National Oceanic and Atmospheric Administration predicts an 80% ice cover in February. Ice fishermen like these anglers, who landed some trophy walleye last year, would be delighted. (Photo by D’Arcy Egan)

While this assessment on Great Lakes evaporation from Great Lakes Integrated Sciences & Assessments explains that high ice cover is still associated with less evaporation the following spring, it also reports that evaporation rates before winter have an effect on how much ice forms in the first place. Specifically, it explains that high evaporation rates in the fall correspond with high ice cover the following winter. So just as ice cover can influence evaporation, the reverse is true as well – a much different story than the one-way street it was previously thought to be.

As of Jan. 1, the total Great Lakes ice cover was just 1.3%. That’s about a third as much ice as was around this time last year, and barely anything compared to early 2018, when it was already almost 20%. The shallow, protected bays tend to freeze first, especially ones that are located in the northern Great Lakes region. So it makes sense that most of the ice so far is in the bays of Lake Superior, followed by northern bays in Lakes Michigan and Huron like Green Bay and Georgian Bay.

GLERL conducts research on ice cover forecasting on two different time scales: short-term (1-5 days) and seasonal. GLERL’s short-term ice forecasting is part of the upgrade to the Great Lakes Operational Forecast System (GLOFS), a set of models currently being transitioned to operations at the National Ocean Service to predict things like currents, water temperature, water levels, and ice. The ice nowcast and forecast products (concentration, thickness, velocity) have been tested for the past several years and will soon become available for the general public.