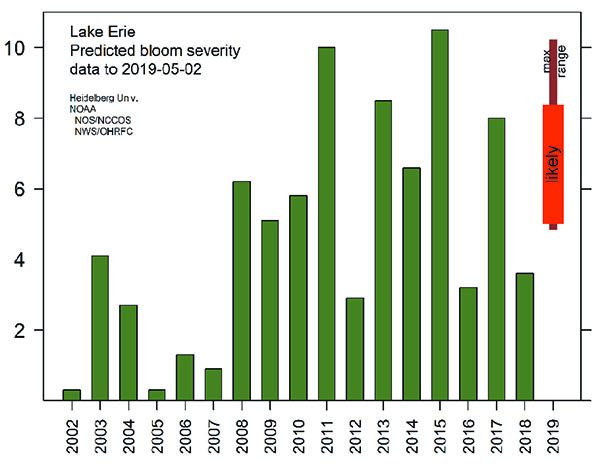 The forecast of the severity of Lake Erie harmful algal blooms (HAB) this year has been set at 5 on a possible scale of 10, which is larger than 2018. The increase is the result of heavy rains in April producing high river flow and large phosphorus loads from agricultural sources in the Maumee River Watershed, the largest in the Great Lakes.

The final forecast will be issued at the 8th annual HAB Forecast Program at Ohio State University’s Stone Lab on Lake Erie’s Gibraltar Island on July 11.

“This year’s high water levels could be a moderating factor,” said Reutter, “even though voluntary actions by farmers have produced no improvements in the concentrations of the phosphorus leaving the Maumee River,” which drives Lake Erie’s HABs.

High water flow into Lake Erie from the Maumee River Watershed is expected to decrease after this week, and the forecast for severe rains is expected to be near normal going into summer. There is considerable uncertainty in the projected maximum severity, which is based on possible heavy rains in June and early July.

Any bloom that develops will change with time and move with the wind, according this week’s NOAA report. The most massive algal blooms occurred in 2011 and 2015.