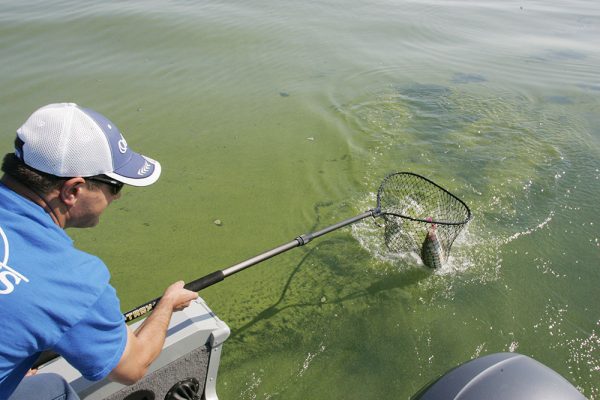 Algal blooms, like this one appearing in Western Lake Erie, have reached crisis status in past summers, containing toxins harmful to people, pets and wildlife. 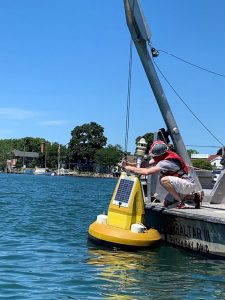 A rather dry spring has translated into less agricultural phosphorus being flushed into Western Lake Erie from the Maumee River Watershed. The phosphorus drives the formation of harmful algal blooms (HABs), and with few major rain events this year, there is the likelihood of a smaller harmful algal bloom than last year, reports the National Oceanic and Atmospheric Administration (HABs).

“Much of (Lake Erie) will be fine, most of the time,” said Rick Stumpf, an oceanographer with NOAA’s National Centers for Coastal Ocean Science. He said isolated areas could experience surface scum on calm days, and people and their pets should refrain from swimming in those areas.

Satellite imagery last week pinpointed an early algal bloom in Toledo’s Maumee Bay, which has travelled north along the Michigan coast to Brest Bay and along the Ohio coast to the Magee Marsh Wildlife area. The first surface scum formation was noted northwest of West Sister Island.

On average years, NOAA experts say boaters, swimmers and fishermen can find safe Lake Erie waters despite the formation of the HABs.

“The bloom is limited by how much phosphorus there is in the water,” said Stumpf. “Once it uses up all the phosphorus, it just stays. Normally that’s somewhere in mid-August, but I would expect that by July the bloom will have reached its peak . . . and stay until we finally get cold weather.”

About 2,000 farmers and an estimated 1.1 million acres are enrolled in those conservation programs.

No matter what the estimated severity of the HABs might be, said Crystal Davis, director of policy and strategic engagement at the Alliance for the Great Lakes, “when the algal blooms in Western Lake Erie can be seen from space, it doesn’t take an expert to understand that this is becoming a crisis.”

U.S. Rep. Marcy Kaptur of Toledo, Chairwoman of the House Subommittee on Energy and Water Development, said that “harmful algal blooms have plagued the waters of Western Lake Erie and its tributaries for the last decade. They are a painful reminder that more has to be done at the federal, state and local levels to protect and restore our beloved Lake Erie.

“While I’m thankful that this year’s bloom will be less severe than in years past, we cannot be idle. That’s why I’m fighting to secure significantly more funding for the invaluable Great Lakes Restoration Initiative. Science and environmental stewardship will be our guide to properly protect and restore Lake Erie and its tributaries.”