NOAA to scan island areas of Lake Erie this summer 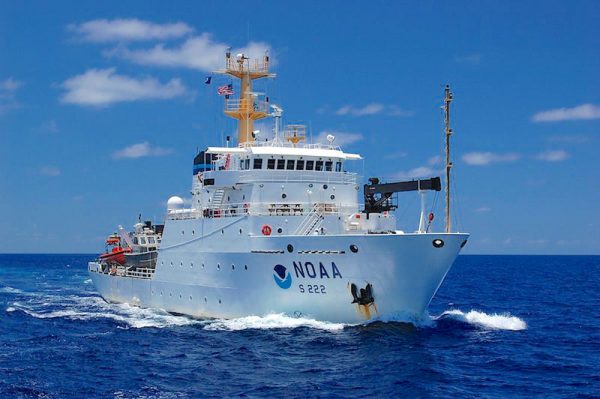 The 208-foot Thomas Jefferson, a National Oceanic and Atmospheric Administration survey ship based in Norfolk, Va., will be a familiar sight this summer on Lake Erie. (Photo by NOAA)

The 208-foot oceangoing National Oceanic and Atmospheric Administration survey ship the Thomas Jefferson will map portions of the bottom of Lake Erie this summer, including the Western Lake Erie islands.

“It looks like we will be spending most of our summer in ports in Cleveland,” said NOAA’s Emily Beard Christman. “Once we arrive in the area we are hoping to schedule some open houses, ship tours and events.”

Old shipwrecks have long been a fascination for researchers for decades, due to Lake Erie’s treacherous shallow limestone reefs. NOAA officials expect to find a few, perhaps even remnants from the Battle of Lake Erie just west of the Lake Erie Islands on Sept. 10, 1813.

It was the turning point of the War of 1812 between the U.S. forces and the British. Master Commandant Oliver Hazard Perry’s fleet of nine vessels defeated British commander Robert H. Barclay’s squadron of six vessels in a three-hour battle, despite the British having superior firepower.

The Lake Erie Island area will get a close look because of its shallow waters and busy commercial ship traffic, recreational boating and fishing and the ferries that take vehicles and tourists to the islands all summer long.

As the volume, value and size of marine vessels in U.S. waters continues to grow, NOAA officials want to increase the accuracy and frequency of surveys. A great amount of data on nautical charts of the Great Lakes is more than 50 years old, and only about 5 to 15 percent of the Great Lakes are mapped to modern standards using remote sensing methods such as light detection and ranging and sound navigation and ranging.

Parts of Lake Erie’s lakebed have not been surveyed since the 1940s, and are overdue for an update of the nautical charters that both commercial ships and recreational boaters rely on.

The Thomas Jefferson will use multi-beam sonar to create 3-D images of the lakebid. The vessel will use the Port of Cleveland as its home base for the operation.