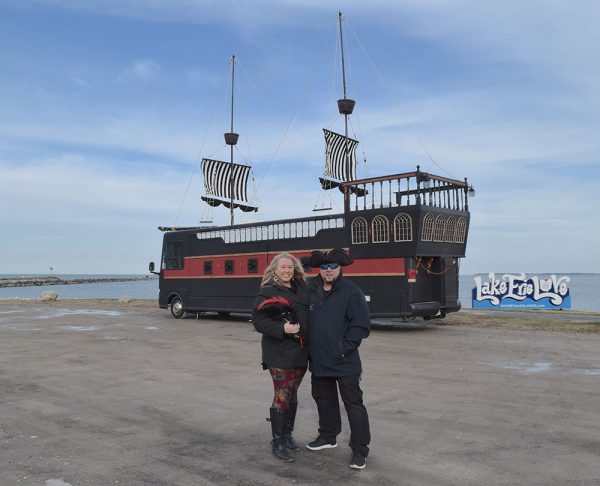 Kelly and Bill Rigoni have the R/V Northern Exposure Land Ship rigged and ready to set sail for the I-X Center in Cleveland for the Progressive Cleveland Boat Show & Fishing Expo on Jan. 16-20. (Photo by D’Arcy Egan)

Kelly and Bill Rigoni are going to turn heads next week when the Progressive Cleveland Boat Show & Fishing Expo opens its new, expanded exposition at the I-X Center in Cleveland. That already happened last week when the Port Clinton couple rigged the sails of the R/V Northern Exposure Land Ship for a photo shoot.

Bill Rigoni had clambered atop the 41-foot converted Coachman recreational vehicle as it sat on on the Lake Erie shoreline at Waterworks Park in Port Clinton, struggling with the sails on a windy day to make the behemoth presentable for a photo shoot. A surprising number of vehicles drifted into the park lot from Perry Street. It was hard not to notice the pirate ship-shaped craft, and people were eager to take a closer look at the Rigoni’s creation.

“We’ve designed the R/V Northern Exposure Land Ship to be the perfect companion on the road to our Northern Exposure brick and mortar store on Madison Street in Port Clinton,” said Bill Rigoni, whose candle company also features nautical merchandise and clothing.

“We plan on doing a lot of boat shows, pirate festivals and RV campgrounds. We’ll make our debut net week in Cleveland, but we’re working on itinerary of stops all this summer, and in the years to come,” said Kelly Rigoni.

The Rigonis have been working non-stop on their creation since finding the fascinating RV on the Internet a year and a half ago. The large motor home had been the NCAA College Football Hall of Fame Traveling Museum, and stationed in South Bend, Ind. It took plenty of hard work and lots of paint and elbow grease by the Rigonis, Kelly’s dad John Henderson, and a small army of friends, but the R/V Northern Exposure Land Ship became road worthy and ready for the summer season.

“It’s our baby, an extension of our Port Clinton store,” said Kelly Rigoni. “We couldn’t afford to buy a bigger building in Port Clinton, which will always be our home, but we could build a pirate ship and expand our wonderful customer base.”

She has lined up a Gypsy tarot card reader to entertain customers — The Amazing Coastalina, The Fortune Teller of the Seas — and scoured the country for unique pirate wear for the crew — and for customers at the shows.

The conversion required a lot of help from their Launch Crew, and plenty of location donations from friends and customers. Their long list of local sponsors includes Lake Erie Shores & Islands, The Spero Group, Crown Battery, Heinemann’s Winery, The Jet Express and Ship Shape Marine Inc.