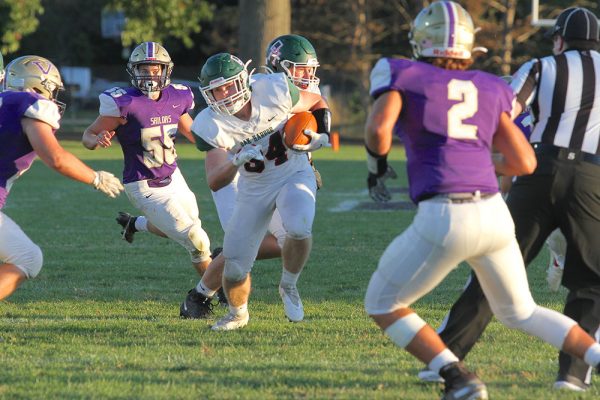 Rushing for 83 yards on 14 carries, Collin Fauver scored a trio of first half touchdowns. (Photo by Julie Overmyer)

VERMILION — Following a tough loss to Bellevue in the season opener, Oak Harbor’s Rockets bounced back on Friday night to defeat Vermilion, 30-0.

“I thought defensively we played really well,” said Oak Harbor coach Mike May. “It started with our scoring a safety when Jack Zeitzheim got their quarterback in the end zone. Overall, I thought our guys ran to the ball and tackled well.”

Collin Fauver, who carried the ball 14 times for 83 yards, scored on a 1-yard run on the last play of the first quarter to push the lead to 9-0 following Cade Petersen’s extra point. Oak Harbor put the game away when Fauver scored touchdowns on two more runs (2, 10) late in the second quarter to make it 22-0 at halftime.

“The offensive line really played well and we struggled a little bit early in the game with some red-zone opportunities, but we opened things up in the second quarter,” said May. “Collin had some hard runs and was able to finish in the end zone. He played a really good game.” 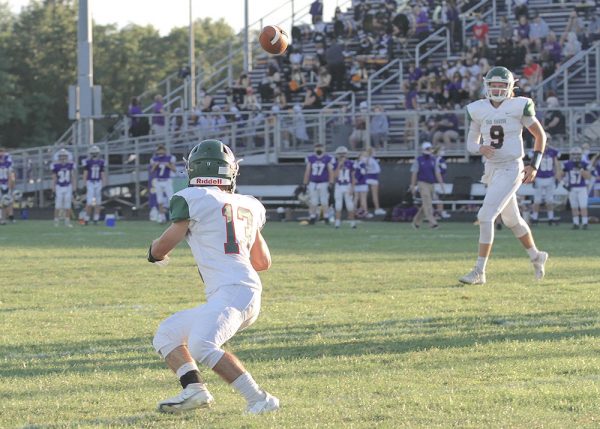 Rocket Quarterback Ashton Schroeder connects on a pass to Gannon Duty for a big gain. (Photo by Julie Overmyer)

Rocket quarterback Ashton Schroeder scored a touchdown on a 3-yard run with 5:35 remaining in the third quarter to close out the scoring.

Oak Harbor lost to Bellevue, 14-7, in week one, but May felt his team was able to find something of a silver lining in the defeat.

“I think playing a team like Bellevue really made us a better football team. We scrimmage them every year, and it always gives us an idea of where we are,” said May. “I think the same thing happened with playing them in week one. We made quite a bit of an improvement from week one to week two.”

The Rockets host Huron on Friday. The Tigers and the Rockets have had a lot of great battles over the years, and this upcoming game should be no different. Huron is coming off a 36-0 win over Willard, and the Tigers beat Norwalk, 21-7, in the opener.

“Huron is always very athletic. Offensively, they have an athletic group of wide receivers and one of the top running backs in the league in J.J. Holiday, who started for them last year,” said May. “The quarterback is a threat to run and throw and they have a big, physical offensive line.