Oak Harbor, Eastwood a battle of unbeaten in semifinals 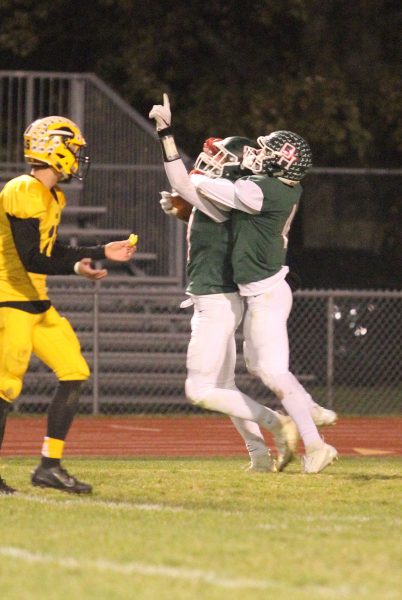 The Oak Harbor Rockets celebrate after convincingly defeating Beachwood last Saturday, 41-7. The Rockets now move on to a battle of the unbeaten. They will meet Eastwood in the Division V semifinals on Saturday, Nov. 16 at 7 p.m. at Lake Community Stadium in Millbury, Ohio. (Photo by Julie Overmyer)

For 16 straight years, from 2001-16, Oak Harbor and Eastwood faced each other once a year.

It was a competitive rivalry, one that saw each team win its share of games throughout the years.

Now the teams, both undefeated, will resume their series in the Division V regional semifinals, the winner coming within one game of the state tournament.

The Rockets (11-0) are coming off a 41-7 win over Beachwood, and the Eagles (11-0) defeated Liberty-Benton, 28-17 last weekend. Oak Harbor’s win saw them dominate the Bison, scoring the game’s first 35 points while holding the Beachwood rushing attack in check. Jac Alexander carried the ball 17 times for 137 yards and three touchdowns while Clay Schulte had 17 carries for 82 yards and two scores.

Eastwood, out of the Northern Buckeye Conference, trailed, 17-14 at halftime before dominating the second half. Eastwood took the lead for good at 21-17 when Justin Pickerel (27 carries, 148 yards, 3 TD) scored a touchdown from one yard out. Eastwood controlled the ball for 18:48 of the second half’s 24 minutes and wore down Liberty-Benton.

The Eagles have operated the Wing-T offense for years and have had plenty of success doing so.

“Their coaches have mastered the offense. Their linemen are tough and get off the ball well,” said Oak Harbor coach Mike May. “Eastwood always has excellent skill-position players that are capable of making big plays at any time.

“Eastwood is always a well-coached and disciplined football team. Their Wing-T offense is very physical and explosive.”

The Eagle defense has allowed more than 14 points just twice this season and has been an integral part of the team’s success.

“Eastwood has an excellent defense. Their scheme is simple and sound, which allow their players to play fast. They are fundamentally sound and pursue to the football really well,” said May. “The defense runs to the ball and is very good at preventing big plays.”