Clay Schulte is pretty small for a linebacker, but he’s usually the best player on the field. The Oak Harbor junior, who is 5-11 and 170 pounds, was honored for his efforts this season as Schulte earned second-team status at linebacker in Division V.

He wasn’t the only Rocket to receive accolades. Lineman Cole Roob was named to the defense’s third team in Div. V and OL/DL Cole Heffernan and WR/DB Hunter Wilkins earned special-mention honors, too.

Schulte led the team with 175 tackles, and came up big in Oak Harbor’s 28-21 victory over Marion Pleasant in the playoffs, finishing with 21 tackles in the game. He also had 13 sacks on the year.

Roob, who is 5-11, 270 pounds, was a force and was second on the team with 91 tackles. Wilkins finished with 79 tackles and intercepted six passes, including two returned for touchdowns. Heffernan earned all-conference honors for his play on the offensive line, a unit that created holes for Schulte and Jac Alexander throughout the season.

Schulte is one of those special players who has that it factor, something you can’t quite identify but recognize when you watch a great player. He was a standout at linebacker, but he’s also a very good running back, having earned league honors at both positions. On offense, he rushed 158 times for 819 yards and 11 touchdowns and also caught 43 passes for 467 yards and six scores.

“He definitely plays a lot bigger than he is, and he plays a lot faster than he is. He has great instincts. Great players have a natural instinct to get to the football, and he’s one of those guys,” said Oak Harbor coach Mike May. “He’s a great leader. I’ve known him since he was born. In various sports, I’ve never seen him take a play off and I’ve never seen him not play hard.”

Schulte is also a standout in basketball and baseball.

“I think the fact that he is a three-sport athletic is key to his success. He’s competing year-round, and it’s important. I’m not a big fan of specialization. We try to get our kids to play as many sports as possible,” said May. “His toughness and competitiveness influence those around him in a positive way. The guys are inspired to play hard because of that.”

May also talked about the tremendous performance Schulte had in the first round of the playoffs.

“We made an adjustment (at halftime) and that was just to cover up some more of their offensive linemen with our defensive linemen and cover them up and keep them off Clay. I think he had 21 tackles, which is a phenomenal,” said May. “That was our adjustment, to give him more opportunities to make plays.”

May also had high praise for Roob, who recovered nicely after breaking his leg and tearing his ACL last season.

“He has just a natural ability on defense to use his hands really well (and) shed blocks, he’s a natural at that. Guys like that don’t come around very often,” said May. “He’s one of the best I’ve coached as far as getting off blocks. And he’s a good athlete, he can run well.

“He loves football. Once he got injured, he was committed to coming back stronger than ever. He attacked his rehab, he wore a brace all year and was better than ever. It was a tribute to his hard work to rehab his knee and get back.”

Roob, who was named the lineman of the year in the Bay Division for two straight years, is good enough to play at the collegiate level.

“He definitely wants to play college football. A lot of Div. III schools have been in to talk to him,” said May. “He’s looking at a lot of options right now.”

Wilkins and Heffernan earned league honors for their efforts on defense.

“Hunter had a great year with six interceptions. He played our strong safety position, one of the more important positions on our defense,” said May. “He had to be equally effective against the run and the pass. Offensively, he was our second leading receiver with 34 catches, 390 yards and three touchdowns. He made plays for us on both sides.

“Cole was a key member of our team. He had a great year starting on varsity at offensive tackle. He worked hard in the weight room,” said May. “We will miss him quite a bit — he really came on (and) was a pleasant surprise for us. He went above and beyond what we (expected). He was consistent and he kept improving. The last few games, we played him on defense because he got so much better.”

It was a special group of seniors. Though there were only nine, they made their presence felt in bringing the program to new heights. It’s a group that included Roob, Heffernan, Wilkins, Austin Martikan, Michael Wojciechowski, Kyle Hanselman, Nick Pfeiffer, Brandon Elmes and Connor Hoy.

“I’m proud of our seniors,” said May. “We only had nine seniors, this was the senior class that brought Oak Harbor back to a championship level and the playoffs.” 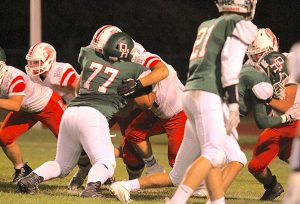 Cole Roob and Hunter Wilkins competed against Port Clinton earlier this season. Both players, along with teammates Clay Schulte and Cole Heffernan, earned all-Ohio honors for their play this season. (Photo by Yaneek Smith) 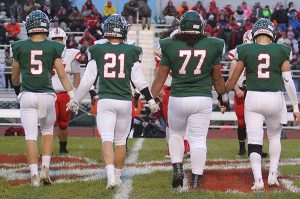