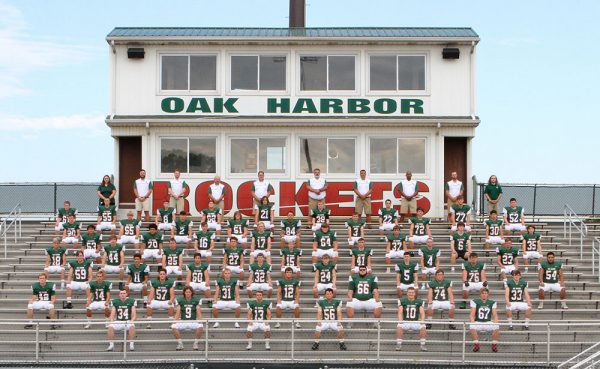 Preview: Last season was one of the best in Oak Harbor football history.

The Rockets won their third regional championship in the program’s history, finishing off a two-year run that saw them win two Sandusky Bay Conference Bay Division titles and go 4-2 in the playoffs.

But gone from last year are a loaded senior class that included all-Ohioans in Jac Alexander and Clay Schulte, and a number of all-league players. However, this year’s group includes another talented senior class and has plenty of capable players.

Ashton Schroeder, who is 6-3 and weighs 200 pounds, steps in at quarterback. He’ll be joined in the backfield by Ryan Ridener and Collin Fauver, both of whom saw plenty of action last season. The three-wide receiver set includes Tyler Wadsworth and Nick Wirkner, with Gannon Duty, Robby Jacobsen, Hayden Hower and Judson Overmyer also competing for playing time.

“We have had excellent leadership from our captains and the senior class. We are excited to have a season and have the opportunity to compete for a third straight SBC Bay Division championship,” said Oak Harbor coach Mike May. “Our goals are always the same. We want to compete for the SBC and regional championships — those are always our two of our main goals. We want to continue to build on the momentum that we have built in our program over the last few years.”

May likes what he sees in this year’s offense thus far, which operates out of the two-back, three-wide formation.

“Ashton Schroeder is doing a great job leading our offense from the quarterback position. We have two big backs in Collin Fauver and Ryan Ridener, which will allow us to be physical in the run game,” said May. “The offensive line is led by our center Aiden Hall, who started most of the season last year. Egan Bolander and Dylan Schiets also started games last season on the offensive line. The development of our receivers will be a major key to our offense. We will need to be efficient in the passing game to keep defenses honest.”

Ridener is happy with what he has seen of his team in pre-season practice.

“We are looking sharp,” he said. “We have a hard-working group of guys who are anxious to compete. This season is extra special not just because it’s my senior year, but because we have a chance to make the playoffs and win an SBC title for the third year in a row. That has never been done before at Oak Harbor.”

Fauver, who will see plenty of carries this season, talked about why he’s optimistic about what lies ahead.

“It’s the leadership and dedication of our coaches and players,” he said. “I’ve learned that the game revolves around all 11 players on the field and everyone needs to do their individual job to be successful.”

Ridener had to put his football career on hold after suffering a severe back injury last season. Following a win over Willard in week nine, he underwent an x-ray and MRI to see what was causing the discomfort.

“It showed that I had bilateral pars fractures at my L4 and L5 vertebrae with an anterior slide of the L5. I was devastated when I found out I wouldn’t be able to finish the season and help my team in the playoffs,” said Ridenour.

“At the time, I was questioning if I would ever be able to be physically active again. I was told that the fractures might never heal and the L5 vertebrae would never slide back.

“After the season was over, I got a second opinion from a sports-medicine doctor, who gave me some good news. He gave me some core exercises and stretches to do to strengthen my muscles around the injury. He told me I should be able to play if I keep up with it. Since then, I have made it my mission to do everything in my power to get back on the field.”

The defense, which returns seven starters and operates out of the 4-2-5 or 4-4 formations, has a number of players going both ways. Bolander, Dewitz, Snow and Schiets start on the defensive line with Zach Clune and Jayson England backing them up. Ridener and Jack Zeitzheim are the inside linebackers and Fauver, a first-team selection last year, and Schroeder are the outside linebackers. Eli Sherman could also see time at outside linebacker. The secondary, meanwhile, features Wirkner as the free safety and a number of players — Jacobsen, Wadsworth, Hower, Duty, Hayden Craig and Cade Petersen — battling it out for time at cornerback.

Petersen is the kicker and Schroeder will handle punting duties.

Despite losing two good senior classes in a row, Oak Harbor expects to compete at a high level and should contend for another league title.

“We have a good number of players returning that were major contributors to our 13-1 record a year ago. They were on the field throughout the playoffs and benefited from those extra weeks of football,” said May. “The culture and leadership of our team is strong. We are excited to have the opportunity to compete for a third straight SBC championship.”

Fauver is enthused about playing for one last season.

“With this being my last year,” he said, “I’m very excited to get on the field and play under the lights.”