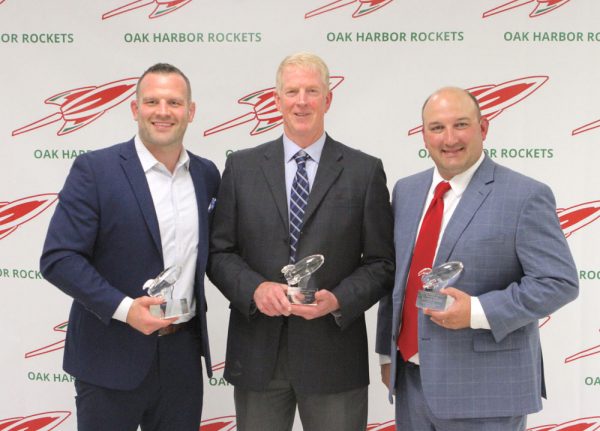 Every class that is inducted into the Oak Harbor Sports Hall of Fame is elite and prestigious. But this one on Saturday was particularly special.

For the first time in nearly 20 years, the Oak Harbor Athletic Hall of Fame inducted three new members, and it was a very worthy class. The inductees were J.D. Bergman, the greatest athlete in the history of the school and a 2003 graduate; Pat Kania, the only Rocket to ever earn All-Ohio status in three sports, who graduated in 1999; and Gary Quisno, the finest coach in the history of the school, though George Bergman might have something to say about that.

The ceremony was filled with laughs and great memories with J.D. Bergman being presented by his uncle, George Bergman, the head coach of the wrestling team; Kania was presented by his friend and former teammate, Zeb Miller, who had the attendees laughing throughout his speech; and Quisno was presented by one of his of his former assistant coaches, Doug Slagle.

Dr. Guy Parmigian, the superintendent of Benton-Carroll-Salem School District, credited Dan Hoover, the athletic director, as well as Matt Tooman and Kim Dusseau for their efforts.

“These are three legendary individuals of Oak Harbor athletics and continue to inspire us today — Gary Quisno, J.D. Bergman and Pat Kania. This is also a celebration of high school athletics and how it can unite, inspire and change the community,” said Parmigian. “Athletics reminds us that the impossible is possible. Athletics is more than just wins and losses.”

This was the first class to be honored since 2004.

A two-time state champion in wrestling and an All-Ohioan in football at running back and linebacker, Bergman graduated from Oak Harbor in 2003. He was 85-0 during his final two seasons as a Rocket wrestler to win state championship titles. As a running back, he set the single-season school record for rushing yards and rushing yards in a game, and led Oak Harbor to two playoff appearances and a Sandusky Bay Conference championship.

He went on to a stellar career at Ohio State University where he was a three-time All-American. Following his collegiate career, he won the U.S. Open twice and finished first at the U.S. World Team Trials in 2010.

George Bergman, who coached his nephew and Kania as the wrestling coach and as the junior-high football coach, praised them, and Quisno. Bergman recalled J.D.’s performance in a football game, a 35-21 win over Perkins in 2002 after J.D. set school records for single-game carries, single-game rushing yards and tackles.

“In wrestling, as much talent as the Lord gave him in football, he gave him more in wrestling,” George Bergman said. “He was second in the country his senior year of high school. He was a captain at Ohio State, and qualified for the NCAA Tournament, winning five straight matches and finishing third.

“That helped the Buckeyes take third in the country. He went on to be the No. 1 wrestler in the world in 2010, wrestled in a couple of world championships, always representing Oak Harbor.”

“I always looked up to Pat and Zeb. Coach Quisno, he’s one of the best high school football coaches. I remember always being with Joe Noggle, Dave Bensch and Greg Van Horn,” Bergman said.

“My mom and dad did so much for us. My dad is such a humble man. He won the state title in 1972 at Cardinal Stritch. For the parents out there, make it fun for your kids. My dad brought us around to wrestling. I threatened to quit in junior high. In hindsight looking back, I made the right decision. You want to be the best in your town, county, country — and why not the best in the world?”

Bergman had high praise for the Miller brothers, who helped strengthen the Oak Harbor wrestling program.

“Tait and Zeb are here, and Ferd changed the game in Oak Harbor, the first person that really helped us get in shape,” said Bergman.

Zeb Miller talked about the character of Kania.

“Pat Kania is a great guy with a great work ethic. If you’re in a bind, that’s the guy you want. Pat was always making you better,” Miller said. “It’s awesome to have lifelong friends like Pat. You know he’s always going to be there for you. He’s always super positive, and he does a great job at Norwalk High School.”

Miller also talked about his love for his hometown.

Kania, one of Quisno’s finest players, played on the offensive and defensive lines for the football team, and qualified for state in the discus while setting a school record of 167 feet, 5 inches. As a wrestler he won three SBC titles and was fourth in Div. II in ’97.

He then went on to a successful throwing career at Bowling Green State University.

Kania, the principal at Norwalk High School, had special memories of his old friends and coaches, and especially his football days.

“I played football, wrestling and track — the perfect sports that have no cuts, are devoid mostly of politics and there’s no AAU. Running through the tunnel to the football field., there’s nothing like it,” said Kania.“I had the most supportive parents. They let us know when we did a nice job or a bad job. We always got the donkey call from the stands.”

“My junior year, I was throwing 130s, and I was behind Eric Schwind,” Kania said. “Gary knew how to push the right buttons. Gary took video of this great thrower, Larry Wilson, and said, ‘This is what you need to do.’

“Gary always believed in a commitment to excellence, and I think that’s what this town is about. I learned how to be a professional here.”

Quisno’s record at Oak Harbor was 224-83, with just three losing seasons. In 24 out of 29 seasons, his teams won at least seven games. He has 253 overall victories that includes four seasons at Perkins and Danbury high schools. Quisno also had a successful run for four years as an offensive coordinator for the Pirates. Quisno is a member of the Ohio High School Football Coaches Hall of Fame, the Port Clinton Athletic Hall of Fame and the Miami (Ohio) University Cradle of Coaches.

“He has a 73% winning percentage. From 1988-2004, he did not have a losing season,” said Slagle, who came to Oak Harbor in 2001 and still works as an assistant coach. “He coached with Tom Osborne for 20 years — he deserves an award for that, and he’s still sane enough to talk about it.

“Gary makes you want to be better. He instills an expectation that you want to meet every day. That’s what sets him apart from others.

“He and his wife, Becky, they’ve instilled those traits in their children. Gary is also in the Miami University Cradle of Coaches. That list includes the likes of Ara Parseghian, Woody Hayes and Bo Schembechler.”

Quisno is the athletic director at Danbury High School, and talked about living in Oak Harbor for nearly 40 years.

“All I could think when I started coaching was, ‘Gary, don’t screw it up.’ It was my honor and privilege to be the head football coach here for 29 years. There is nothing like Friday night football,” he said.

“The cheerleaders, the band, fall weather, great teams, great players, great friendships, great memories. For us coaches, it was also family. We’d get together after the games at Oz’s house. Families would come over, we’d talk about the game, laugh a little bit, maybe cry a little bit.

“If you read about people who are successful, they surrounded themselves with good people — hard working, dedicated, they have the best interest of the people they work with,” he said. “I’ve been surrounded with good, caring individuals, good coaches; great staff, great people, great times.”

Quisno recalled a game during Bergman’s senior year, a 52-51, four-overtime win over Huron, where Bergman scored on a two-point conversion to win the game.

“We called a timeout, and J.D. said, ‘Let’s end this game, give me the ball,’ and he scored the two-point conversion,” Quisno said.

Quisno passed out plenty of credit for his success.

“People who I’ve been fortunate enough to be surrounded by — especially the woman that has been my partner in life for 42 years, Becky. If Gary Quisno is in the hall of fame, then Becky Quisno deserves to be in the coaches’s wives’ hall of fame,” he said. “Our kids, Adam, Mandy and Annie, were great student-athletes. Adam’s wife, Kristin, and Mandy’s husband is Ian, who is a fantastic football coach.”

“Wayne Siefke served as one of my coaches. Kelly Croy, he’s a rock star in the field of education; he’s written books. Doug Slagle came to us kind of late in my time here. He’s got quite a perverted sense of humor,” Quisno said.

“George Bergman coached the junior high football program. Eric Dusseau played for us. Dan Hoover, when the heck is he going to retire? One time, Dan told me there was a problem with one of my player’s AC joint, and I thought, what’s wrong with the air conditioner?

“I enjoyed my time coaching here and teaching. I accept this honor on behalf of all the coaches that got me here, the players, administrators, the people. It was a privilege. I couldn’t be more grateful.”