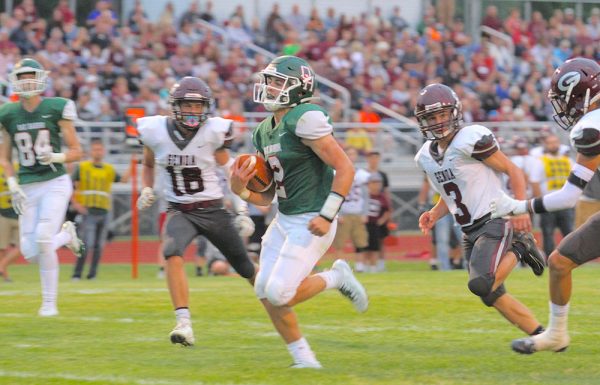 Oak Harbor quarterback Jac Alexander had one of the best games of his career on Friday night in the 100th Celestial Bowl against Genoa. Alexander completed 10 of 11 passes for 254 yards, passing for three touchdowns, and ran for 109 yards and two touchdowns. (Photo by Julie Overmyer)

OAK HARBOR — Oak Harbor came out firing on all cylinders in its matchup with rival Genoa, defeating the Comets in a blowout, 49-14.

An interception by Ryan Ridener on the game’s first possession gave the Rockets (2-0) the ball at Genoa’s 39-yard line, and the first of four first-quarter touchdowns came on a 37-yard pass from Jac Alexander to Tyler May. Caleb Heintz’s first of seven extra points made it 7-0.

The Comets (0-2) went three-and-out on their next possession, and a short punt gave Oak Harbor the ball at its own 45. Alexander scored on the first play of the drive, taking the ball up the middle before heading left and racing down the sideline for a touchdown to make it 14-0. 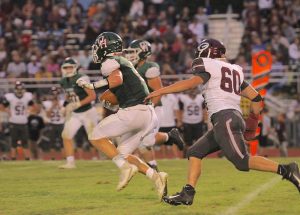 A 21-yard touchdown run by Oak Harbor’s Clay Schulte was instrumental in winning the 100th Celestial Bowl, 49-14, in a battle with rival Genoa on Friday night. (Photo by Julie Overmyer)

Another three-and-out gave the Rockets the ball and Alexander and May hooked up again, this time from 34 yards out. May caught the pass on a slant at the Genoa 13 and took it in for the score.

The final touchdown of the quarter came on a 21-yard touchdown run by Clay Schulte.

Oak Harbor coach Mike May credited his offensive and defensive lines for their play.

“I thought our kids came out and played hard from the beginning,” said May. “Defensively, we were sound. Offensively, I think our offensive line did a good job run blocking and pass blocking, and that allowed our skill position players to make some plays.”

The Rockets did a stellar job of taking the fight to the Comets from the start and prevented them from creating any momentum.

“That was really important. We captured a lot of momentum early in the game,” said May. “I think we scored four touchdowns on our first eight plays. Our offensive line was the key against Fostoria because they’re playing very physical, and that wears down your opponent. They have had a lot to do with our success.” 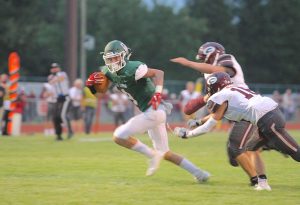 Oak Harbor’s Tyler May scored on 37-yard pass from Jan Alexander on Friday night in a 49-14 rout of Genoa. (Photo by Julie Overmyer)

“I think we have a good mix of players,” said May. “We have a powerful, explosive running back in Clay. Jac is good at running and throwing, and our wide receivers, Gage Brough and Buddy Nuhfer, had a lot of touchdown blocks that sprung things open for Clay, Tyler and Jac. That doesn’t show up on the stat sheet.”

Coaching legends Jim Firestone and Gary Quisno were honored before the game, as were former players from both teams to celebrate 100 years of the Celestial Bowl rivalry.

This Friday, Oak Harbor travels to Rossford to take on the Bulldogs, who are also 2-0. Rossford is coming off a 27-20 victory over Port Clinton and features a potent offense with a quarterback and receiving corps capable of making big plays.

“Their offensive is very explosive. They have one of the best quarterbacks in the area, wide receivers that are very athletic, and a big, physical offensive line,” said May. “Defensively, they are extremely aggressive. They blitz a lot. We’re going to have to have a great week of practice. That’s a very good football team that we’re facing on Friday.”