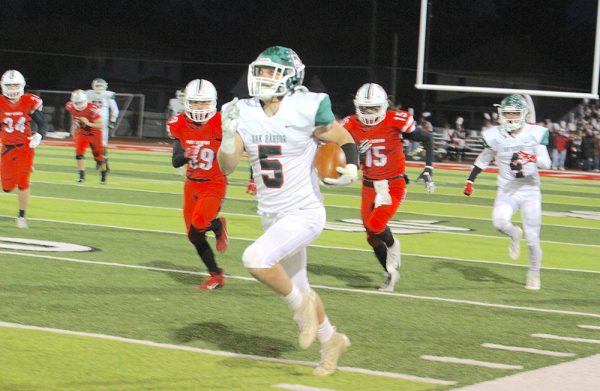 Rockets’ quarterback Jac Alexander drilled receiver Clay Schulte with a long pass just 18 seconds into Friday night’s game to give Oak Harbor a lead they would never relinquish, topping Port Clinton, 48-8. On the Redskins first play from scrimmage, Schulte intercepted a pass and romped 24 yards for a score, his second touchdown in just 24 seconds of action. (Photo by Julie Overmyer)

PORT CLINTON — Before anyone could blink, Oak Harbor had scored 13 points in less just 24 seconds of action.
It turned out to be a microcosm for the entire game as the Rockets, who scored four touchdowns in the first quarter, soundly defeated Port Clinton, 48-8, to finish the regular season undefeated to claim its second consecutive Sandusky Bay Conference Bay Division title.

The scoring began just 18 seconds into the game when Jac Alexander threw a swing pass to Clay Schulte, who raced down the left sideline for a touchdown, getting a key block from Gage Brough at the Redskins 40-yard line and giving Oak Harbor the lead for good at 6-0. Caleb Heintz’s extra point, the first of four in the game, pushed the lead to seven points. 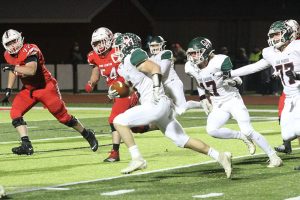 Oak Harbor’s two touchdowns by Clay Schulte in just 24 seconds at the start off Friday night’s football game helped route Port Clinton, 48-8. Schulte scored on a long pass from quarterback Jac Alexander on the first play of the game, and followed it immediately with this interception of an errant Redskins’ pass by Colton Klima, scampering 24 yards for his second touchdown. The game story is on Page 2B (Photo by Julie Overmyer)

On the next play from scrimmage, Schulte intercepted a Colton Klima pass and raced 24 yards for the touchdown, pushing the lead to 13-0. After forcing a punt, the Rockets drove 92 yards in six plays, scoring on a 4-yard run by Alexander. Then Alexander connected with Schulte on the two-point conversion to increase the lead to 21-0. The final touchdown of the first quarter came with 2:42 to play when Alexander scored on a 15-yard run to make it 28-0, capping a six-play, 64-yard drive and effectively putting the game away.

“Our kids played really well, they were really focused in practice this week. I was pleased with the way the guys played,” said Oak Harbor Coach Mike May. “It was a fast start with those two touchdowns and that helped us grab the momentum. We kept it because the defense played well and our offensive line took over and our skill guys made some plays and broke it open.”

The victory clinches a postseason berth for the Rockets for the second consecutive year.

Oak Harbor has won every game by at least 19 points this season, and their performance against Port Clinton could be a sign of things to come in the postseason.

“It was important to come in here and lock up the SBC title,” May said. “(And) building momentum for the playoffs is huge.”

“We’ve stuck it out as a group together,” Schulte said of he and his teammates. “We’ve bought into winning and put in all the work. And we’re also getting some of our injured offensive linemen back.”

It was a tough loss for Port Clinton, which had its first losing season in six years.

For the ‘Skins, Cooper Stine rushed 13 times for 73 yards.
“Those (first) two touchdowns were tough to overcome. We couldn’t stop them, and they stopped us on defense,” said Port Clinton coach Beau Carmon. “We got beat by a better football team.”

It was the end of a season for the ‘Skins, one that saw them deal with a bevy of injuries, youth and inexperience, not to mention a very difficult schedule. Despite having such a tough season, Carmon had high praise for his seniors, a group that includes the likes of Stine, Colton Klima, Connor Gillum, Zach Weldon, Logan Faulkner, Caden Chapman and Zayne Manning.

“In terms of wins and losses, it’s not what we wanted. But as a program, you can’t just measure that. We showed glimpses of great football (during the season). We started off in a 0-3 hole, but because of the leadership of our seniors, we never stopped fighting. I never noticed a letdown in practice.

“They practiced the same against Oak Harbor as they did against Bellevue,” said Carmon. “Our seniors deserved a better season. They are the best group of leaders I’ve had since I’ve been here. They led by example, vocally and in the locker room.”

The Rockets finish first in the Division V, Region 18 standings with 25.43 points. On Saturday, Oak Harbor hosts Beachwood in the first round of the playoffs. 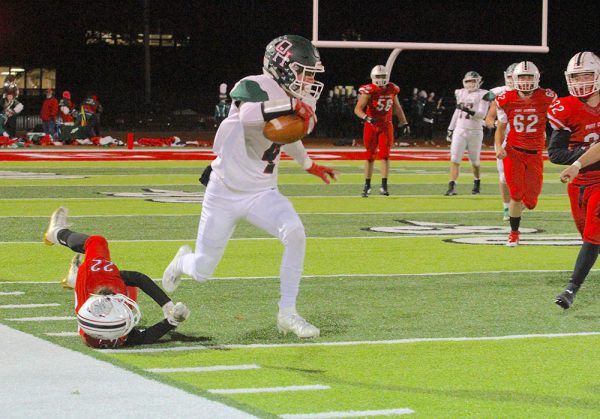 Oak Harbor receiver Tyler May caught four passes for 87 yards on Friday night against Port Clinton, including a touchdown reception, in the 48-8 victory. (Photo by Julie Overmyer).