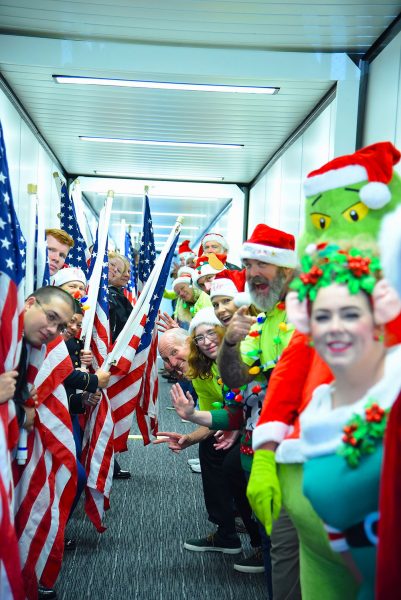 The Gary Sinise Foundation Snowball Express took 1,750 members of Gold Star Families to Walt Disney World Resort in Orlando, Fla.. The foundation created a variety of activities and entertainment, including a concert from Gary Sinise and the Lt. Dan Band.

NORFOLK, VA. (NNS) – As Gold Star families arrived at Norfolk International Airport on Saturday, Dec. 7 to board the 2019 Snowball Express, they were warmly greeted by more than 280 service members and community volunteers from the Hampton Roads area.

“Military children are some of the toughest yet often lonely kids in our country,” said Hall. “To be a child of a fallen hero is worthy of being honored, supported, loved, and celebrated. I have kids myself and I would want the same for mine.”

The annual Snowball Express event began in 2006, with a letter written by a fallen soldier to his wife, only to be opened should he perish in battle. While the letter expressed many hopes, one wish was that they visit Disneyland.

Inspired by the letter, Snowball Express was created to bring together the children and surviving spouses of fallen U.S. military heroes for a healing retreat.

“Although bittersweet, we are so thankful to have this experience,” said Gold Star Spouse, Rebecca Headings. “I am very grateful for the experience but even more thankful to be surrounded by people who understand what we are going through.”

As the families arrived for the trip the terminal was decorated from top to bottom in balloons, games, crafts, Disney characters and even a surprise visit from Santa.

“It was important for me to be there to support these families, support the kids, and let them know as an elected official I want to do my duty and service to make sure they have all the resources they need to be successful,” said Virginia Beach Councilman Aaron Rouse. “I also want them realize that as a community we support them.”

The families were in Walt Disney World Resort for four days, and American Airlines chartered flights with all volunteer crews to make stops in more than 20 cities to make this happen.

According to American Airlines, 1,750 snowball passengers flew on 13 chartered American Airlines aircraft to Orlando. During the trip, families had direct access to complimentary resources such as counseling services; application support for educational scholarships; education about and access to medical and government benefits; financial counseling and assistance; mentoring; and aid for those with special needs or disabilities. Gary Sinise Foundation Snowball Express offered a variety of activities and entertainment, including a concert from Gary Sinise and the Lt. Dan Band.

“The Gary Sinise Foundation Snowball Express annual event is about honoring our fallen heroes and their families, who continue, day in and day out, to endure the cost of war,” said Elizabeth Fields, COO of the Gary Sinise Foundation. “While we can never truly repay the debt we owe these families, we can strive to show each of them our appreciation and gratitude whenever and wherever possible. With the support and generosity of the American people and wonderful sponsors, we are honored to be able to give a little back by lifting spirits as we take these families to the happiest place on earth, the Walt Disney World Resort.”

According to Naval Stations Norfolk Gold Star Coordinator, Melissa Black, the call for volunteers went out to all the Hampton Roads bases in late October.

The volunteer turnout this year is absolutely amazing and it just continues to grow each year,” said Black.  “This is just a great opportunity to show how the military community gives back to the families that have lost so much. It reminds them that they have support from the military and hopefully helps them emotionally get through their sorrows.”