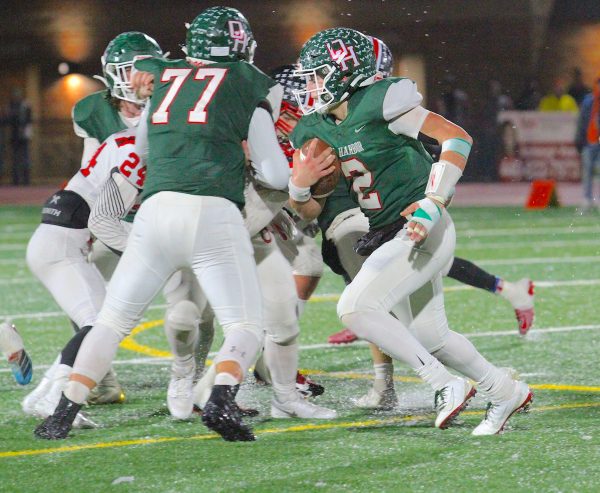 An outstanding running back for the Oak Harbor Rockets, Jac Alexander (2) has decided to play basketball for Marietta College.

An incredible senior season that saw Oak Harbor Rockets’ star athlete Jac Alexander earn all-Ohio honors in both football and basketball is now over, but he’ll continue his athletic career by playing basketball at Marietta College.

As a senior, Alexander led the Rocket football team to a 13-1 record and the third regional championship in school history. Alexander also helped the basketball team win its first league title in 18 years.

As quarterback of the football team, he set a number of school records and completed 94-of-154 passes for 1,741 yards and 24 touchdowns compared to just two interceptions. Alexander also rushed 176 times for 1,428 yards and 19 touchdowns.

On the basketball court, he averaged 21.5 points, 3.9 rebounds and 3.3 assists. Alexander also played baseball, but spring sports were cancelled due to the coronavirus pandemic.

At Marietta, in southeast Ohio along the Ohio River, Alexander will play for a program that has won five out of the last six Ohio Athletic Conference championships and advanced to the Division III Elite Eight last season.

“There’s a winning culture (in the program). I don’t think many players want to lose, but winning needs to be at the top of the list. I know it’s going to be competitive. I’m not sure the exact number, they have a bunch of recruits, (and they’re) pretty solid,” said Alexander.

“When I went down there, everyone was friendly. It’s a family-like atmosphere, it’s very tight-knit. There’s not much else going on besides the college sports. I liked all the coaches, and I liked the way they handled themselves.”

“I gave football a lot of consideration. I had a couple of Division II offers (Walsh, Lake Erie College, Concordia), but nothing crazy,” he said. “It was (about) what I wanted to do and where I wanted to go. At Marietta, I just like the way that they handle themselves and the way they attack things.

“In football, it’s kind of written out. You lift and do the skill work. With basketball, you can work on your craft whenever you want. It was a tough decision. I put a lot of thought into it and talked to a lot of people I trust. That’s where I want to play basketball for four years. I like the idea of working on just one sport year-round.”

“Our big goal in my junior year was to win the regional title. We came short of that. We had a good season, but we knew that we thought we could take the next step. We said, ‘We might as well just go win the whole thing,’” said Alexander. “If you set your standards high and they’re out of reach, you might come up short, but it’ll be better. That was a huge win against Orrville. “We were down by 14 points at one point, playing the state champions in Division V, but our guys just faced up to it. There was no quit in us. We made some plays down the stretch and won the game.

Oak Harbor had big class of talented seniors last year, with nine on the basketball team and almost 20 on the football team.

“Oak Harbor basketball wasn’t that great five years ago,” said Alexander. “That was one of the big things we wanted to change in our school, and bring a winning culture to the school. Clay (Schulte) and I were sitting on the sidelines as ball boys and we’d say, ‘We want to change this.’ That’s kind of what fueled us as individuals. We can be the difference maker.”

As a kid growing up, Alexander looked up to his father, Steve, who played football at Ohio Wesleyan University.

“I had a great time in Oak Harbor, I couldn’t have scripted it any better. I have made so many great friends.”

Port Clinton High School senior Carlie Blaesing signed a letter of commitment this week to continue her education and swimming career at Bowling...

BY JOHN SCHAFFNER Both Port Clinton and Oak Harbor were supposed to be pretty good basketball teams this season. Friday night, the matchup between...