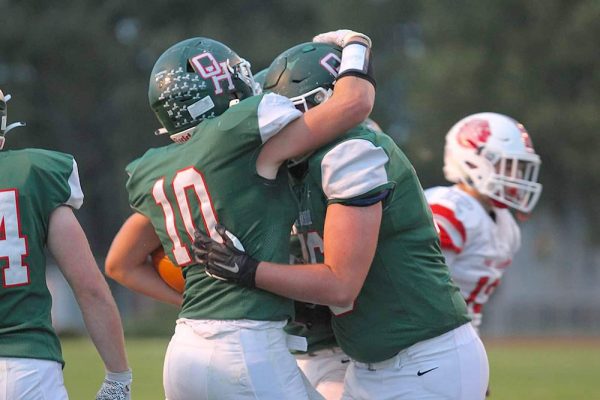 OAK HARBOR — With its starting quarterback injured, Oak Harbor was forced to improvise and find new, creative formations and ways to run the football. So it was only fitting that a touchdown pass would be the difference in the Rockets’ 14-7 victory over Port Clinton.

Facing a third-and-7 from the Redskin 19-yard-line, Oak Harbor running back Ryan Ridener took the snap, faked a sweep to Gannon Duty and found Collin Fauver wide open over the middle for a touchdown with 37 seconds to play. Cade Petersen’s extra point gave the Rockets (3-3, 3-2 Sandusky Bay Conference Bay Division) a 14-7 lead, and they held on for the victory.

Port Clinton (3-3, 3-2) drove to the Oak Harbor 27 on the ensuing drive, but quarterback Cam Gillum was sacked on the game’s final play to end the threat.

It was a back-and-forth game that saw the Rockets make one more play than the ‘Skins. Oak Harbor exerted its will at the line of scrimmage, rushing 51 times for 237 yards and throwing just three times. Ridener led the rushing attack, running 26 times for 167 yards and a touchdown. The Rocket line, comprised of center Aiden Hall, guards Egan Bolander and Dylan Shiets and tackles Blake DeWitz and Ryan Snow, played well and helped the offense control the tempo of the game.

“Both teams played extremely hard,” said Oak Harbor coach Mike May. “That was a great football game. It’s a great rivalry. Our offensive line played outstanding football. They sustained their blocks, and we’ve got two backs that can gain those tough yards.”

May credited his offensive staff, particularly Scott Schulte and Eric Dusseau, for finding new ways to utilize the Rockets’ talents.

“Our offensive coaches put together a good game plan,” May said. “They came up with some different formations and were very creative.” 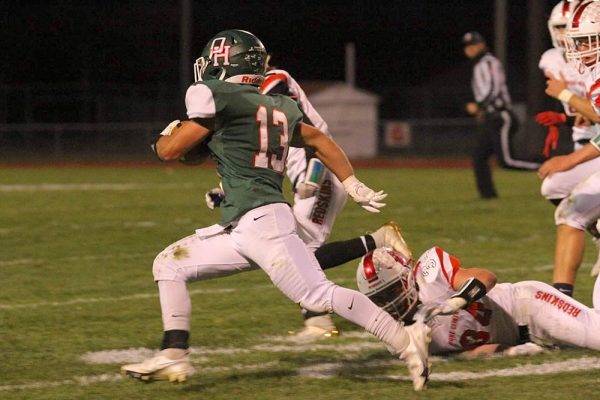 Trailing, 7-0, the ‘Skins tied it up with just 3:30 to play when Cam Gillum found Tommy Owens on a quick slant that Owens took the rest of the way for an 87-yard touchdown. Tyler Webb kicked the extra point to tie the score at 7-7.

Oak Harbor answered, driving 66 yards in seven plays and scoring when Ridener connected with Fauver from 19 yards out. Ridener carried the ball four times for 33 yards on the drive.

“We didn’t make enough plays, and they made more plays than we did. We had poor field position when we did get the ball,” said Port Clinton coach Beau Carmon. “We’ve scored 13 points in the last two games against good teams, and that’s not going to cut it. We had opportunities, and we didn’t take advantage of them.

“I think our defense bent a little bit on the run, but we only gave up two touchdowns, and we’ll take that. It doesn’t matter how many yards we put up, it’s about points. We just needed to score more touchdowns.”

The Rockets scored on a 1-yard run by Ridener with 3:22 to play in the first quarter to take the early lead, and held off a number of Port Clinton drives that went deep into Oak Harbor territory. The ‘Skins, who out-gained the Rockets in total yards, 368-255, got down to the Oak Harbor 1 late in the third quarter after Gillum connected with Adam Thorbahn on a 68-yard pass on third-and-6 from the Port Clinton 31.

The defense was completely fooled on the fake to the running back, and Thorbahn took the ball most of the way after catching it on a short out route. But Petersen, who also came up with a key interception midway thru the fourth quarter, chased Thorbahn down and stopped him from scoring.

The ‘Skins fumbled the ball on first-and-goal, moving them back to the 6. A running play lost two yards to make it third-and-goal from the 8 before Gillum connected with Thorbahn on an apparent touchdown. But the ‘Skins were penalized for having an illegal man downfield. Port Clinton was unable to score on the next two pass plays. 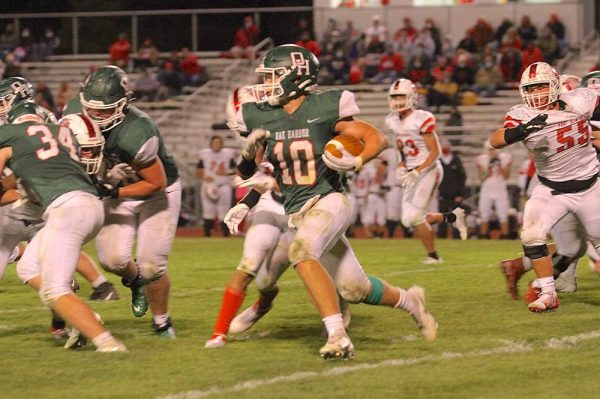 Running back Ryan Ridener was a Friday night star for the Oak Harbor Rockets, rushing for 167 yards and a touchdown and passing to Collin Fauver for the winning score in the closing seconds to beat Port Clinton, 14-7. (Photo by Julie Overmyer).

“That was a huge play in the game,” said May. “That was great hustle by Cade and it saved a touchdown. Our defense held them when they got into the red zone.”

It was a chance for the ‘Skins to tie it up, but proved to be a missed opportunity.

“We were down on the 1-yard-line and we didn’t punch it in,” said Carmon. “The penalty backed us up, and it put us in a difficult position. It was a big momentum shift.

“And they got to move the ball. It was a real momentum game, and it seemed like they had the momentum for most of the game.”

Gillum completed 14-of-25 passes for a touchdown and an interception. Thorbahn caught four passes for 94 yards.

The game’s first drive saw Oak Harbor gain 55 yards in 15 plays and eat up nearly nine minutes of the clock, scoring with 3:32 remaining in the first quarter. The Rockets converted on two fourth downs, both on runs by Ridener, the last of which came on fourth-and-goal from the Port Clinton 1.