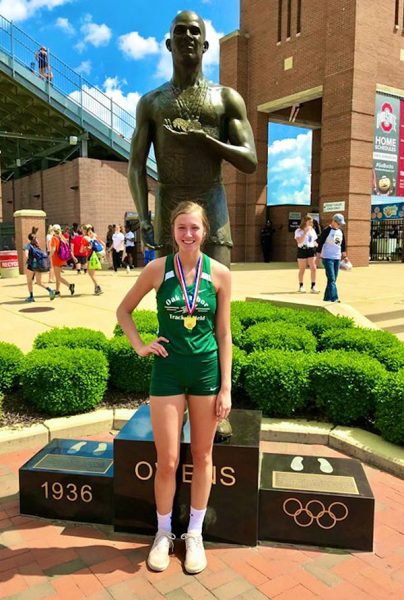 The Oak Harbor senior had placed in her two previous trips to the state tournament. A third time was ultimately the charm. As a team, the Rockets finished in 24th place with 10 points. Indian Hill ran away with the title, scoring 43 points. The boys team, meanwhile, also finished in 24th place, scoring nine points. Shelby won the DII championship with 57 points.

Bloomer credited her offseason commitment to getting stronger as one of the reasons she was able to reach new heights.

“One (reason for my improvement) would definitely be my work in the weight room over the winter. I got a lot stronger this year. I (also) had the mindset of it being my senior year,” said Bloomer.

“I think my sophomore and junior years having the first- and second-place girls in state being part of my district and region helped me prepare for (the state tournament).”

“She’s my first state champion in 21 years of coaching. I couldn’t be more proud of her. She’s put in a lot of time in the weight room,” said McKitrick. “She found herself in a good position. I’m extremely happy for her. She was a regional champion and now a state champion. That’s a fantastic finish to a stellar career.”

Bloomer enjoyed sharing the reward with her teammates.

“That’s probably just as important as my individual event. I try and take the biggest leadership role as I can,” she said. “It makes for a better experience than if I went down myself.”

Bloomer is also a stellar volleyball player, and will continue her career at Cleveland State University. She was a four-time, all-Ohioan for her efforts and stands fifth all-time in the state for kills.

On the boys’ side, Brandon Elmes led the way for the Rockets.

“I think it’s been an amazing season to win the SBC and get so many people down to Columbus,” said Oak Harbor coach Andy Augsburger. “I think we placed first in six invitationals. We have a lot of freshman and underclassmen who lettered this year. That came under the leadership of our juniors and seniors who helped younger athletes realize it is a process.

Augsburger was especially pleased with the performance of Elmes, who has come a long way since he was a freshman.

“Brandon Elmes broke a school record in the 300 hurdles. One of Brandon’s goals was he wanted to break that school record, (and) broke the school record with the 4×100 relay team,” said Augsburger.

“Being sixth in our region, I don’t think anyone expected our 4×100 relay was supposed to be there. But we knew what we were capable of doing,” said Elmes. “We finished fourth in state and smashed the school record. I couldn’t be any happier. I also had to focus on the 300 hurdles and ran my personal best and broke the school record.”

“I just want to say thank you to the community, the parents and our boosters. That was a great sendoff when we went to Columbus,” said Augsburger. “The coaching staff has been great. The community at Oak Harbor and B-C-S is top notch. I really appreciate them.”