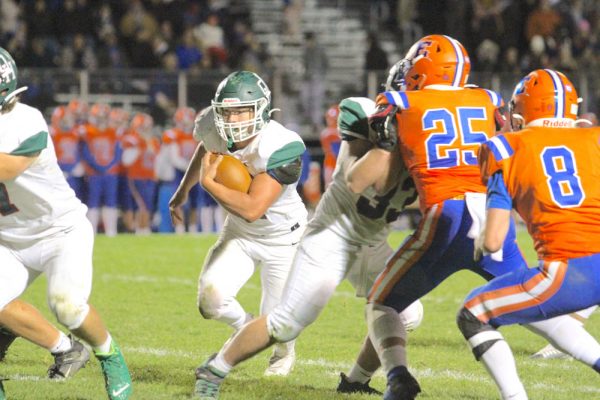 The Oak Harbor Rockets have depth in the running game and can also be effective in the passing game. They showed their prowess on Friday night, as Michael Lalonde had a big night passing with three touchdowns as the Rockets wore down a stubborn Edison, 28-14.

The Rockets were playing without the services of running back Jacob Risener. However, they did have a backup plan by sending out junior Dalton Witter, who led the Rocket running attack with 145 yards on 26 totes.

However, it was Lalonde who helped Coach Mike May make some key adjustments on offense in the second half. May’s team went into the locker room uncharacteristically down, 14-7. Coach May also made some excellent defensive adjustments that helped his team shut out the Chargers in the second half while the Rockets scored three touchdowns to secure the win and remain in first place in the SBC Bay Division.

Lalonde was a very efficient, connecting on 16 of 21 passing for the game, good for 144 yards and three touchdowns. He threw no interceptions. His touchdown passes went to Ethan Stokes, Hayden Buhro and Braden Butzin.

The Rockets hit the road again this Friday night to play at Willard, who lost to a potent Port Clinton last Friday, 68-13. However, in previous games, they have demonstrated the ability to score a lot of points.