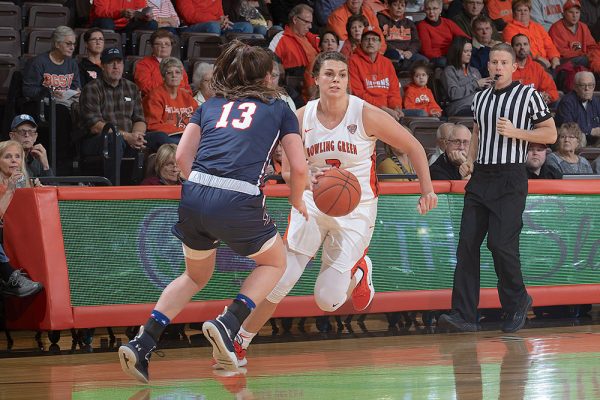 Andrea Cecil’s three seasons playing for Bowling Green were very successful. However, after missing her senior season with plantar fasciitis, which gave her an extra year of eligibility, the Oak Harbor native has decided to transfer to Florida Gulf Coast University in Fort Myers, Fla.

The Eagles have gone 89-13 over the past three seasons and made the NCAA Tournament twice. This season, which saw FGCU go 30-3, was suspended just before the tournament would have begun due to the COVID-19 pandemic.

Karl Smesko is in his 18th season coaching the FGCU program, and has over 500 career victories as a head coach. He has a career record of 554-122 (.820). During his time in Fort Myers, Smesko has guided FGCU to a 137-5 (.975) record in the Atlantic Sun Conference with five undefeated seasons.

The 10-time ASUN Coach of the Year has guided the green and blue to four 30-plus win seasons over the past six years while compiling a 179-31 (.852) record. He has also guided the program to 16 consecutive 20-win seasons and 10-straight 25-win seasons.

Smesko talked about what Cecil brings to the table.

“Andrea is very skilled,” Smesko said. “She is a versatile and efficient scorer who is also an excellent 3-point shooter. She fits in very well with our style of play.”

The Eagles will have to replace eight players and four starters from last year’s team.

Cecil entered the transfer portal following her senior season at BGSU, and liked what FGCU had to offer.

“(FGCU) reached out to me. I entered the transfer portal and was a little overwhelmed with so many schools reaching out,” said Cecil. “I had to do my research and finish my college career, and FCGU was my best choice.

“I’m really excited, I already moved down. I’ve been working out with some of the girls and maintaining COVID-19 regulations. Being down here, I’m learning some of the culture and that makes me excited.”

At BGSU, Cecil had a very successful carer, earning third-team honors in the Mid-American Conference as a junior after averaging 15.8 points, which led the team, and 5.9 rebounds. She also shot 45.9% from the floor, 40.1% from 3-point range and 88.9% from the free-throw line.

“In college, everyone was that standout player in high school. Everyone you’re playing against on the court is a capable basketball player. The speed changes a lot from high school to college. Everyone is very capable. You have to be able to make quicker decisions, and that speeds the game up a lot,” Cecil says.

As much as she enjoyed playing for the Falcons, it was some of the experiences off the court that will stay with her.

“As much as we were with each other on the court, the off-the-court stuff is what I remember when I look back,” Cecil said. “All the friendships that I made with everyone, hanging out, that’s what I’ll look back and remember. I’m grateful that basketball brought us together. Jane Uecker and Caterrion Thompson, both in my class, are my best friends.”

“Everybody around me was super helpful. We set times where we have to get study hours, and student-athlete services helps us plan everything,” she said. “There’s a whole crew helping us to be successful. If not for their help, I’m not sure if a 3.6 GPA would’ve happened. They helped me be the best student I could be.”

When she’s done playing, Cecil hopes to get into coaching and stay involved with the game.

“I think basketball has given me so much. It’s made me be able to see incredible places around the world, make some best friends, the best relationships, and I loved some of the relationships I’ve had with my coaches. It would be great to relay that on to others,” she said. “I want to give back to the game that gave so much to me.”

While at Oak Harbor High School, Cecil accumulated a list of accolades. She led the Rockets to a district championship, an SBC title, three sectional championships, and an undefeated regular season while setting a number of records that still stand.