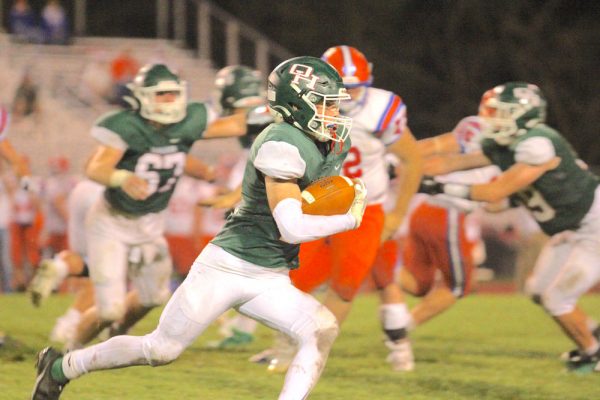 Despite the fact that Oak Harbor lost, 21-20, to Edison last week, the Rockets got a great performance from Hayden Buhro, who was the best player on the field that night.

Buhro made an incredible catch on a 43-yard touchdown pass to tie the game at 14-14 in the third quarter and got Oak Harbor on the board by returning a fumble 32 yards for a touchdown when the Rockets were trailing by 14 points.

Buhro talked about the touchdown reception.

“I just noticed that it happened to be where I could not (run down) the ball. Jaqui (Hayward) put it just high enough to where I could get it,” he said. “It was just a natural football instinct where I could go up and get it.”

Buhro got an assist from Cade Petersen on his first touchdown.

He made what should’ve been the play of the game in overtime, stripping Charger running back Hunter Cassel of the football at the 8-yard-line with Oak Harbor leading 20-14. The ball was recovered by the Rockets, but the officials ruled Cassel down, even though he was upright and running when the ball came out. On the next play, Edison scored a touchdown, then kicked the PAT for the win.

Buhro, a junior, also made a number of key tackles as the Rockets held the Chargers scoreless in the second half.

“I just tried to strip the ball because I knew that was the fastest way to end the game,” he said. “Then we didn’t have to worry about them making the PAT to win the game.”

Buhro has been a steady contributor for the duration of the season, coming up with big plays at opportune times and filling much-needed roles at wide receiver and defensive back.

“I’m just having fun, we’re just playing football. The record doesn’t show what we really are. We’ve just got to cut down on the mistakes, that’s what is killing us. No matter what, we’re a team.”

The Rockets, who are 4-4 and 1-2 in the Sandusky Bay Conference Bay Division, face Willard (0-8, 0-3) on Friday before finishing the season with Port Clinton. Oak Harbor finds itself ranked 15th in the Division V, Region 18 standings with 3.99 points.

“I feel like we’re still rolling. Last week is behind us and we just made some key mistakes, and we can’t let that happen,” said Buhro. “Our ultimate goal is to beat Port Clinton, that’s all that matters. I feel like it’s just as big to us as the Ohio State-Michigan game. If we beat Port Clinton, we get into the playoffs.

“We play Willard this week. We go out there and do our thing and then it’s week 10.”