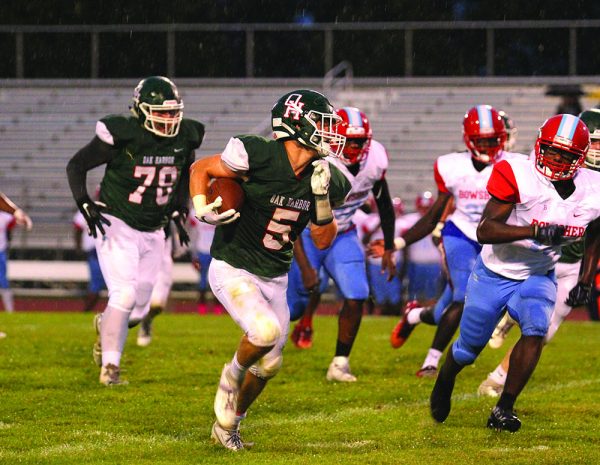 Clay Schulte of the Oak Harbor Rockets rambled for three first-half touchdowns in a 61-3 victory in late September over Toledo Bowsher. (Photo by Julie Overmyer)

Clay Schulte had one of the most outstanding football careers for Oak Harbor High School history, and he’ll be continuing that career at the University of Indianapolis.

The Oak Harbor senior, who helped lead the Rockets to two Sandusky Bay Conference Bay Division titles and a regional championship, leaves the football program as one of its best players.

When he gets to college, Schulte, a running back and linebacker, will be joining a Division II program that has qualified for the postseason for three consecutive seasons. As you might expect, he’s excited to join a program that has had so much success in recent years. Regardless, Schulte chose playing for the Greyhounds not just because of the football team’s success, but because he likes the university and its academic opportunities.

“(The success of the program) wasn’t a huge factor, but it did play a role, knowing the team has a winning culture and they expect to win week in and week out, which is something I liked a lot,” Schulte said. “And the fact that they’ve made the playoffs three years in a row is pretty awesome, too.”

Schulte will also be adjusting to life in the big city in Indianapolis, which has a population of approximately 873,000.

“I think it’s pretty cool being just 10 minutes from downtown,” he said. “I think Indianapolis is a really nice city, too, and it should be a good change of scenery for me.”

The most memorable experience for Schulte would have to be the Rockets’ 35-28 victory over reigning state champion Orrville in the Div. V regional finals. The Red Riders, who featured two-time, All-Ohio running back Marquel Parks, jumped out to a 21-7 lead in the second quarter before two touchdown runs (61, 54) by Schulte tied the game up at halftime.

In the fourth quarter, with the score tied at 28-28, Schulte caught a short pass in the flat from Jac Alexander, avoided tacklers, and hurdled an Orrville defender before racing 67 yards down the sidelines for what would be the game-winning score. Schulte, not Parks, was the best player on the field that night, accumulating 266 yards of total offense (199 rushing yards; 67 receiving yards).

Oak Harbor’s run ended in the state semifinals with a loss to Kirtland, who would win the championship the following week. Regardless, it was the culmination of a fine season for the Rockets an incredible career for Schulte, a four-time letter winner.

“It’s been awesome. I have loved every second of it,” Schulte said. “I honestly couldn’t ask for much more on how it went. I have made so many lifelong friends and bonds that probably won’t ever be broken.

“It was very fulfilling. Jac (Alexander) and Tyler (May) and myself literally talked about bringing the community together and packing the stands with Oak Harbor fans since we were ball boys. It’s like a dream come true.”