Oak Harbor’s Don Douglas ready to be a commissioner

Don Douglas was sworn in as Ottawa County Commissioner on Thursday, Dec. 27, a job he said was ready to tackle after serving as a Village of Oak Harbor councilman, president of council and mayor.

Douglas, a life and health insurance agent, has been on Oak Harbor’s village council for the last decade. He had already decided to run for county commissioner against Democrat Michael Bassett last November, a race he handily won. Before the election, though, former Democratic Mayor Joe Helle resigned Aug. 6 over a residency dispute with the all-all-Republican council, vaulting Douglas into the mayor’s job.

Douglas, 59, had said during the election for the county commissioners seat held by the retiring Jim Sass of Port Clinton, that at the age of 59 his job duties now allowed him the luxury of becoming a more notable public servant by chasing one of the county’s top three political jobs.

“I’m happy to see so many supporters here,” said Douglas at the swearing in ceremony before Judge Bruce Winters in the Ottawa County Common Pleas Court. “These are the people who had believed in me from the start, and had placed their trust in me. I thank all of you for being here.

“I’ve also been well coached by my campaign manager,” he said, referring to his wife, Tony Douglas. “As part of the process I have gone through, I’ve spent a lot of time early on learning the courts, the judges and the different partners. It was important to me to be as engaged as I possibly could.

“For the last 45 days I’ve been involved in meetings and budget processes, meeting the people in all of the county departments,” he said. “The takeaway for me is that I’ve seen a group of people who are committed, dedicated to doing what is best for Ottawa County. That’s where my passion lies as well. I’m extremely pleases and honored to be a part of what I believe is a great team of individuals working together for our county.”

For the first time in memory, all three Ottawa County commissioners are Republicans.

Douglas has been involved in many of the major Ottawa County issues. That includes the proposed closing of the Davis-Besse Nuclear Power Station, which will severely impact the Benton-Carroll-Salem School District in Oak Harbor; the phosphorus pollution resulting in  noxious algal blooms along the Lake Erie shoreline in Ottawa County; and the opiate epidemic faced by Oak Harbor and Ottawa County.

Douglas should be well-suited to tackle those problems, buoyed by a 35-year career in business that included cost control and accounting. 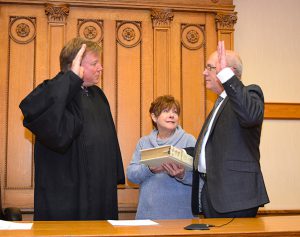