Are you suffering from the winter blues? Does the grey weather have you down? You can lose your blues and kick off your Sunday shoes at the Oak Harbor Thespians productions of “Footloose: The Musical” on Friday through Monday (March 8-10) in the Oak Harbor High School Auditorium. Show times are Friday and Saturday at 7:30 p.m. and Sunday at 2 p.m. Tickets are $10, with students and seniors $8. With its Oscar-nominated hit score (the film soundtrack album has sold over 15 million copies world-wide), the celebrated film musical now bursts explosively onto the stage! When Ren and his mother move from Chicago to a small farming town, Ren is prepared for the adjustment to his new high school. What he isn’t prepared for is the local laws, which include a ban on dancing! The dancing ban was the brainchild of a local preacher bent on exercising control over the town’s youths. When the reverend’s rebellious daughter sets her heart on Ren, her boyfriend tries to sabotage Ren’s reputation and many of the locals are eager to believe the worst about the new kid. 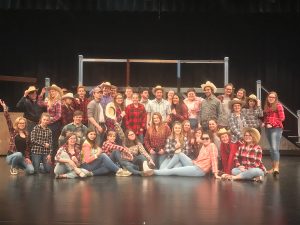