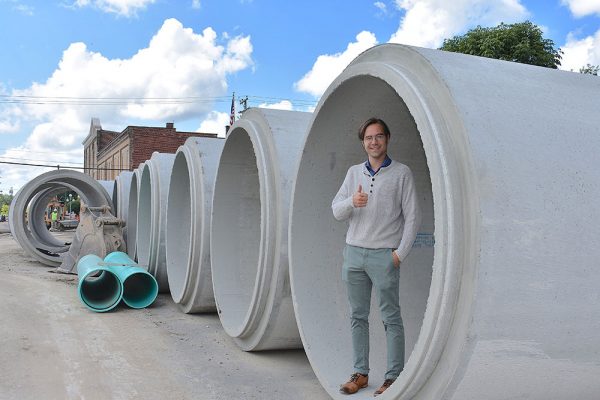 Mayor Quinton Babcock stands in an 84-inch concrete sewer pipe that will carry stormwater to the Portage River.

As the summer season winds down, Oak Harbor’s Church Street Improvement Project is picking up steam. Village Administrator Randall Genzman said the sewer separation project replacing the village’s waste water collection lines, some originally built in the 1880s, is on schedule for completion in July 2021.

To fund the major improvements, the U.S. Department of Agriculture Rural Development awarded village officials more than $4.1 million in grants and provided a loan for just under $5 million.

“This project is the most aggressive storm water separation project in the history of the village,” said Genzman. “After seven years of negotiations with multiple funding agencies, as well as environmental reviews, preliminary designs and permitting with no less than five federal and state agencies, the project has come to fruition.”

Genzman’s timeline for September includes sanitary and storm sewer separation of the Main/Locust Street intersection and installation of new sidewalks and pavement in the Water and Church street areas.

Since July, residents of Oak Harbor have seen road construction and downtown detours necessary to accommodate the project intended to resolve significant inflow and filtration issues with the existing combined wastewater and storm water collection system. Those issues resulted after a Ohio Environmental Protection Agency mandate in 2010 required the implementation of an overflow control system, which was to have maintained existing service while limiting outfalls into the Portage River.

Those measures resulted in unforeseen flooding in several areas of the village, said Genzman, due to the elimination of overflow points to the Portage River from the collections system during rain events.

Mayor Quinton Babcock indicated the Village is pleased with Helms and Sons—the Findlay company contracted to do the work—and their willingness to coordinate with the community to facilitate traffic flow and answer questions of the residents. Though construction is expected to have a community-wide impact in the next two to three months, Babcock said the improvements will result in the removal of “millions of gallons of storm water from the system,” reducing risks to both residents and the ecosystem. 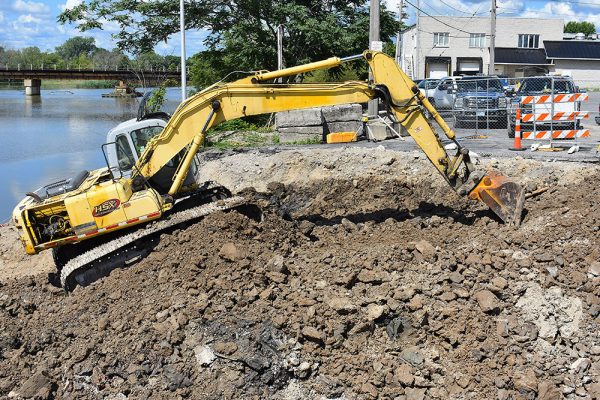 The project will also provide enhanced fire protection with the installation of new fire hydrants, more accessible sidewalks along Church Street and resurfaced roads throughout the downtown area.

On Thursday, the State Route 163 detour was lifted and a new detour for State Route 19 was implemented to complete work in the Main Street/State Route 19 intersection. This intersection is a low point in the village, which makes it a crucial area to connect to the new storm water system. Route 19 will be closed from Route 163 to Ottawa Street. The detour will be in place for 35 days. The closure of the Route 19/Main Street intersection will impact residents and, in particular, school traffic flow, but Babcock stated the business community would be far less affected by that work.

“With the project scheduled to be completed in July 2021, we ask that residents and the traveling public be patient,” said Genzman. “This improvement is long overdue and will be a major source of removing storm water from our collections system, thereby helping the entire village with storm water treatment and removal.”

Combined storm water and sanitary sewer lines, such as in Oak Harbor, are still common throughout the Great Lakes Region. Received through the USDA’s Water and Waste Disposal Loan and Grant program, the funding is intended for rural communities with 10,000 or fewer residents and may be used by eligible entities requiring funds for drinking water, stormwater drainage and waste disposal systems.