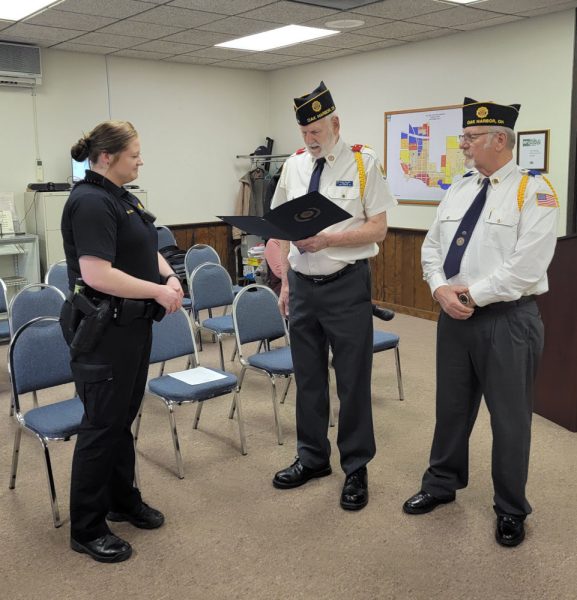 The award acknowledged Beck’s continuing leadership efforts during OHPD’s annual Holiday Drive, which is entering its fifth year of community service this fall.

“I launched the Holiday Drive a few years ago because I saw the increased number of community members that were struggling financially, and emotionally, around the holidays,” said Beck. “If I was alone for the holidays, I would want someone to notice. That’s all we’re really doing — showing people we see them, letting them know we care, and reminding them we’re more than just police officers. We’re humans, and we’re here for you.”

The program provides Thanksgiving meals that were donated by the American Legion to residents in need in the Village and surrounding areas. Members of the public privately contact the department to nominate individuals or families who may benefit.

During the drive, which spans the weeks leading up to both Thanksgiving and Christmas, members of the OHPD and American Legion Auxiliary also deliver holiday gifts, so children may have a surprise on Christmas morning.

According to Beck, the drive is not limited to just people struggling financially. It is also offered to elderly community members who may not have family close by during the holidays or, basically, any “family, couple or individual that could use some holiday cheer.”

“Sgt. Beck has gone above and beyond her duties by helping our residents in need during the holidays,” said Oak Harbor Police Chief Eric Parker, a member of the American Legion. “Her efforts are a great example for others to emulate.”

With the Oak Harbor Police Department since December 2015, Beck served as a patrol officer until her promotion to Sergeant in 2019. The Holiday Drive has grown dramatically each of the past four years and is now assisted by other members of the Police Department, as well, including Chief Dispatcher Anna Bahnsen.