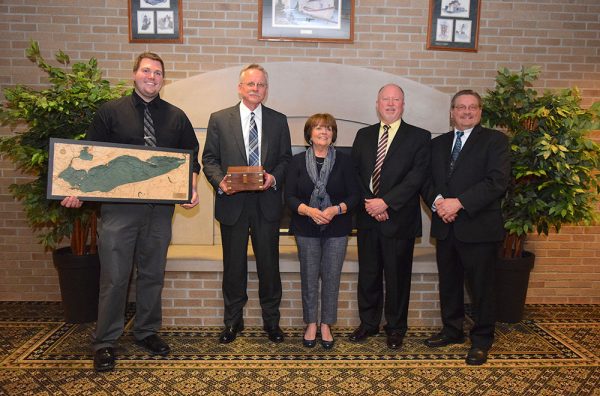 Cory Smith and the Twin Oast Brewing on Catawba Island haven’t been around very long, but the unique brewhouse can now be identified as an award-winning establishment for quaffing a cold one, or two.

Smith was the first to be called to the Camp Perry stage at the Ottawa County Improvement Corporation’s 2020 Business & Industry Awards Dinner. The winner of the Entrepreneur of the Year Award, Smith also shared the good news from the New York International Beer Competition.

“Out of more than 600 beer submissions from over 14 countries, we are excited to share that Twin Oast has been recognized,” said Smith. “We won three medals and were also awarded the gold medal as the Ohio German Style Brewery of the Year.”

The Economic Development Partner of the Year was the Ottawa County Community Foundation, a public charitable organization that annually supports a variety of charitable programs and projects designed to address current and emerging needs of students. The Foundation’s support to Business Advisory Council initiatives has helped fund a handful of activities, including the creation of the Ottawa County Skilled Trades Academy.

The Davis-Besse Nuclear Power Station, recently renamed Energy Harbor Corporation, was named Business of the Year. At risk of closing in recent years, its employees, community leaders and local politicians worked hard to keep the plant open. To help with financial issues, the U.S. Department of Education awarded the plant a $9 million federal research grant to produce hydrogen.

President and CEO of Magruder Hospital in Port Clinton, Todd Almendinger was honored with the Bill Mack Business Leader Award. Heading the hospital’s senior leadership team since 2006, Almendinger has overseen the creation of a campus walking trail, a flagship play-place and a $3.9 million expansion of the surgical section.

Almendinger is also an OCIC trustee, as well as chairman of the Port Clinton Area Chamber of Commerce.

The Volunteers of the Year Award was given to former Mayor Ken Harsanje and his wife, Kim, for their work in cleaning up the Downtown Genoa area. Major projects included the removal of run-down homes, junk cars and the installation of flower pots and benches.

The couple helped organize community events, including the Genoa Homecoming and the annual Festival of Lights. They also served the TNT Mentoring Program, and participated in the Career Showcase as Event Guides.

The OCIC guest speaker was Guhan Venkatu of the Federal Reserve Bank of Cleveland. Venkatu covered the growing U.S. economy, and also the setbacks caused by the spread of coronavirus around the world that included a falling stock market and oil prices.