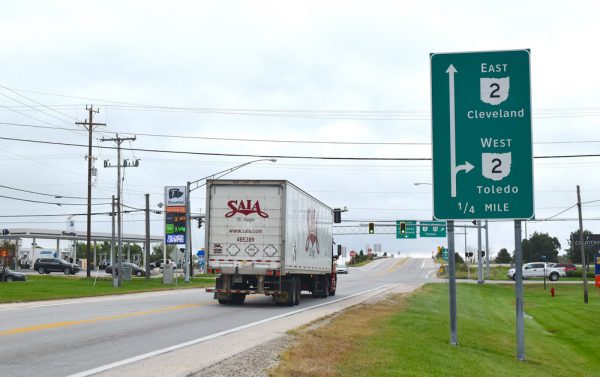 Busy SE Catawba Road (State Route 53) is the entranceway to Ottawa County’s Vacationland, a highway clogged with traffic throughout the summer that has resulted in traffic accidents, road rage and delays in getting to holiday destinations. (Photo by D’Arcy Patrick Egan)

Project Manager Dan Kaseman of District 2 of the Ohio Department of Transportation (ODOT) is hard at work solving the dilemma of SE Catawba Road (State Route 53) that is the gateway to Ottawa County shoreline attractions and ferries to the Lake Erie Islands.

Local officials had been campaigning diligently to fund the Route 53 Corridor, adding a third lane to the two-lane highway from State Route 2 north to State Route 163, providing a center two-way left turn lane and construct two single land roundabouts at the intersection of State Route 2 and adjacent State Road.

ODOT has been regularly evaluating traffic counts in the area, and accepting comments from local residents since December 2020. The Ohio Legislature has approved the $10 million for the project, but the plans have yet to be completed.

To widen State Route 53 will take a full year of construction in 2024, said Kaseman.

“The single roundabout and signal improvements at State Road would actually be more expensive than installing two roundabouts,” said Kasemen. “The extra expense would be due to the required acquisition of more properties at the State Road intersection.”

“This is a very big project for us, and we want to take the time to make sure we get it right,” Kaseman.