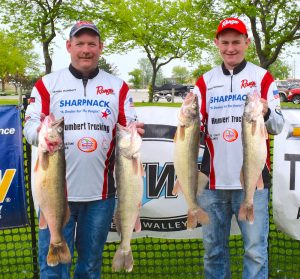 They come in droves before the morning light, and they’re often gone before the sun sets.

They’re anglers, arriving from all around the country, eager to test Lake Erie’s waters and catch a six-fish daily bag limit of the big lake’s legendary walleye. It is an experience that consistently boggles their minds, and drives a thriving charter and tourism industry in Ottawa County.

The Ohio Division of Wildlife (DOW) recently proclaimed that Ohio’s portion of Lake Erie is the epicenter of the world’s largest population of walleye.

As a result, Ohio’s walleye catch rates are unparalleled.

Lake Erie’s angler harvest rate in 2019 was a record-setting 0.83 fish per hour in May, June and July. That is more than five times better than a harvest rate of 0.15 fish per hour, the standard for good walleye lakes around the country.

Fishermen will most likely encounter fish ranging from 15 to 25 inches from the 2014 through 2018 year classes, walleye that can weigh 5 to 7 pounds.

While lots of this year’s walleye are two-year-olds from the 2018 year class, they will soon become legal to catch as they begin to stretch out to the 15-inch size limit.

Anglers in recent days have been reporting they are hooking and gently releasing a great many walleye shorter than the size limit.

“Lake Erie offers some of the best fishing opportunities in the nation,” said DOW Chief Kendra Wecker. “The outlook has never been brighter for Lake Erie walleye fishing, with a strong future that has been built by consistently successful hatches since 2014, and solid science-based management.”

Visiting fishermen have been keeping the fleet of more than 700 charter fishing boats busy, usually taking out six anglers each trip. Many anglers tow their own boats to Ohio, often smaller bass boats that also give them a chance to experience the outstanding smallmouth bass fishing.

The good largemouth bass fishing lures anglers to the fertile harbors, and Lake Erie’s near-shore weed beds. The only disappointment has been a lake-wide slump in the yellow perch fishing, a reason the delectable little fish now cost $23 per pound in local grocery stores for fillets caught by commercial netters.

While the wide open waters of Lake Erie are the focus of summer walleye fishing, the plentiful numbers or walleye moving close to shore at night to feed have created a new tactic. Shore fishermen are casting minnow-style plugs from piers and breakwalls after the sun goes down during the colder months and often find success.