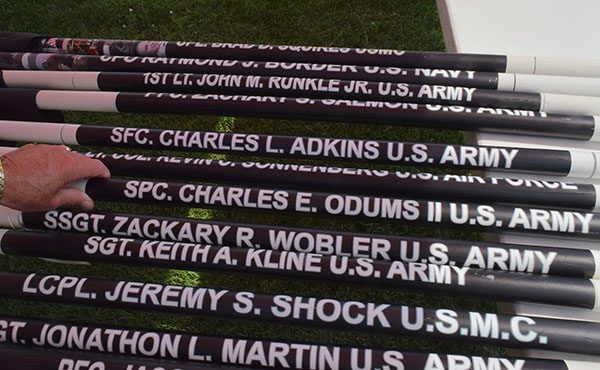 A short, torrential storm could not deter the crowds that turned out on Independence Day to honor members of the Armed Forces who had fallen in the wars in Afghanistan, Iraq and the War on Terrorism since Sept. 11, 2001. 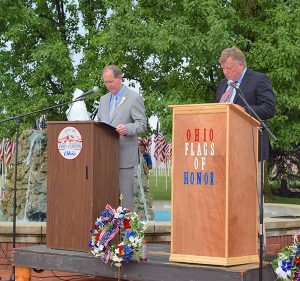 Judges Fritz Hany and Bruce Winters read the names of the Ohioans who have died in the wars in Afghanistan, Iraq and the War on Terrorism since Sept. 11, 2001.

The Ohio Flags of Honor and the volunteers in the Port Clinton area who managed to host the traveling memorial on Independence Day at Waterworks Park stood tall last week, creating a heart-warming ceremony despite extremely short notice of the event and jab from Mother Nature.

The Ohio Flags of honor display has been touring the Buckeye State since 2005, and cities hosting the event usually have seven or eight months to prepare for its arrival.

“We had four or five weeks,” said Mayor Mike Snider of Port Clinton. “I can’t tell you how grateful we are to the many volunteers who worked overtime to make this happen.”

Waterworks Park was a field of flags, with 301 marking the men and women who had died in conflicts in Afghanistan, Iraq and the War on Terrorism since Sept. 11, 2001.

Catawba Island’s Carl Koebel offered The Beacon one of the most poignant accounts of the standing guard at the Ohio Flags of Honor, and meeting Gino Zimmer, who created the traveling memorial after the death of his son, Nick, who had been killed in Kufa, Iraq. 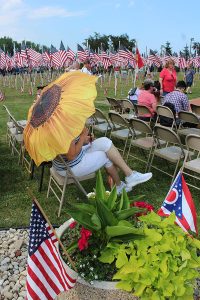 “I wish I could find the words to express the emotions I have gone through volunteering as a sentry at the Flags of Honor in Port Clinton. It is difficult to not choke up explaining to visitors each one of the 301 flags with the names on the black middle section represent an Ohio warrior that his their life in Iraq or Afghanistan, and the other 450 flags posted by sponsors,” wrote Koebel.

“The 750 flags waving in the breeze was a sight to behold, but understanding whey they are there is so overpowering it is impossible to express the emotion. It tears my heart out helping a friend of the deceased find a buddies’ flag. Or even worse, a family member.

“Last evening, a young girl was sitting on the ground next to one of the flags. When I asked if I could help, she said ‘No thanks. I’m just sitting here talking to my uncle.’ It was difficult to keep my tears from falling on her shoulder.”

“The greatest experience was spending time with Gino Zimmer, who started this program to honor his son killed in Iraq. I never met a more dedicated and loving person. To Mike Snider, Rob Ward and all of the hundreds of volunteers who made this possible, God bless you for allowing me the opportunity to share in this great endeavor.”