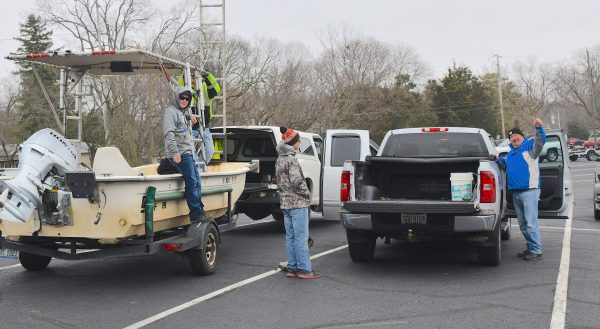 The launch ramps at the Catawba Island State Park have been very popular of late with anglers from around the area, and around the country. The exceptional Lake Erie walleye fishing has forced state officials to stop selling non-resident fishing licenses to trim the crowds. (Photo by D’Arcy Egan)

Ohio Gov. Mike DeWine and Director Mary Mertz of the Ohio Department of Natural Resources decided to shut down the sale of non-resident fishing license to try to keep the crowds of walleye fishermen at bay on Lake Erie. At the same time, Mayor Danny Sanchez of Fremont and Mayor Rich Carr of Maumee both closed their Sandusky and Maumee rivers, respectively, because of the crowds.

All of the decisions relied on Gov. DeWine’s rules for Stay at Home and social distancing to discourage crowds and to slow the spread of the coronavirus (COVID-19) pandemic sweeping through Ohio.

The Lake Erie walleye population in Northwest Ohio has reached record levels. This area of Lake Erie is where huge schools of walleye come to spawn each spring, attracting fishermen from around Ohio and the country.

Toss in a few days of wonderful fishing weather, and the launch ramps around Western Lake Erie have been jam-packed with trailers and tow vehicles, many arriving from other states. The rivers are clogged with wading fishermen, where it is almost impossible to maintain social distancing and eliminate the crowds that could help spread the coronavirus.

“I headed to Lake Erie last weekend just to observe the situation,” said Mary Mertz, director of the Ohio Department of Natural Resources, by telephone. “We didn’t want to allow the launch ramp areas to become overcrowded, and we understand the concerns of local residents.”

With a steady stream of out-of-state anglers towing fishing boats making the scene on a great weekend for walleye fishing on Lake Erie, DeWine announced Monday afternoon that while he would not shut down the walleye fishing, he could keep the crowds at bay by halting the sale of non-resident fishing licenses starting Monday night.

“People entering (Ohio) are being asked to self-quarantine for a period of 14 days, making recreational travel unfeasible,” said Mertz. “We look forward to reopening license sales when hunters and anglers can safety return.”

The spring walleye spawning run up the Sandusky and Maumee rivers is in full swing, and the rivers are also filled with fishermen. Mayor Danny Sanchez of Fremont said the crowds of anglers had been a major problem, overwhelming grocery stores, gas stations and retail shops. He closed the Sandusky River until at least May 1.

Maumee Mayor Rich Carr shut down the Maumee River fishing on Monday at midnight, saying it was in response to the crowds and the health crisis. Carr initially had Maumee Police block access points to the Maumee River, and established a no-parking ban on all streets along the river.