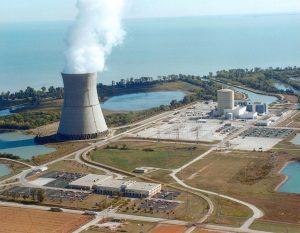 The Ohio House of Representatives, after months of negotiations, gave final approval Tuesday morning to House Bill 6, legislation that will keep Ottawa County’s Davis-Besse Nuclear Power Plant open from 2021 to 2027.

Gov. Mike DeWine is expected to sign the bill into law. Ohio electricity customers will have to pay a new monthly surcharge that ranges from 85 cents for residential customers to $2,400 for large industrial plants.

“What a great day for Ottawa County and nuclear energy,” said Ottawa County Commissioners Mark Stahl on Tuesday afternoon. “It is gratifying to know that Ohio’s General Assembly recognizes what Ottawa County brings to the grid in reliability, resiliency and load capacity.

The Benton-Carroll-Salem School District would have lost major financial support if Davis-Besse had closed. It has a 3.9 mil B-C-S Emergency Levy on the Aug. 6 ballot to keep from making major cuts in its budget.