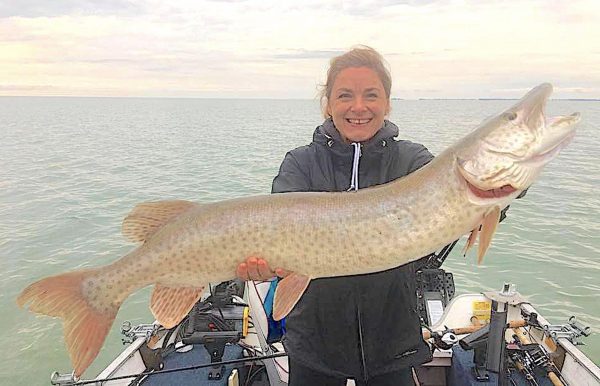 Considered one of the premier trophy fish in this region, the Great Lakes muskie is a very rare catch. Elizabeth Kresse shows off her prize catch, a Great Lakes muskie quickly released after this photograph was taken. (Photo by Mike Durkalec)

Wildlife officers checking walleye anglers while out on Lake Erie on Tuesday, March 31 were shocked when a trio of commercial fishermen from Szuch Fishery, Inc. pulled their trap net off Anchor Point Marina in Lucas County and wantonly killed a trophy Great Lakes muskie and a number of longnose gar caught in the net.

“This type of behavior is unexpected and unacceptable,” said Matt Leibengood, Lake Erie Law Enforcement Supervisor for the Ohio Division of Wildlife. “I am proud of our investigators and officers working to protect Ohio’s natural resources.”

Szuch Fishery Inc. owners, Michael and Holly Such, his wife, and Joseph Imre Jr. were observed and recorded by wildlife officers intentionally injuring the rare trophy-sized muskie after it was removed from their commercial fishing net. The trio also were observed removing numbers longnose gar from the net, a native fish important to the Lake Erie ecosystem. The netters broke the gar’s spines before tossing their carcasses into the lake. 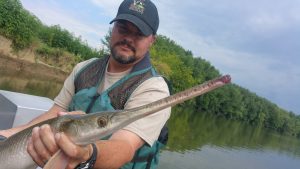 They were charged with one count of causing intentional injury to a non-commercial fish species, 10 counts of stream littering and 10 counts of disposing of dead fish.

The Ohio commercial fishing season for yellow perch does not begin until May 1 for the 18 licensed netters, and walleye are not allowed to be commercially caught in Ohio waters. At this time of year, netters are allowed to catch white perch and rough fish, such as carp and sheepshead.

Leibengood emphasized that anyone can and should report a wildlife violation through the Turn-In-A-Poacher (TIP) program by telephone or text at 1-800-POACHER.