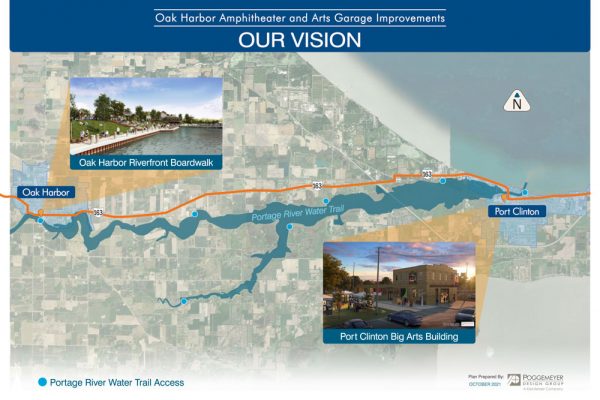 The Portage River Arts/Recreation Corridor, which has jointly been developed by the Village of Oak Harbor and the City of Port Clinton, has officially received $475,000 in funding from the State of Ohio’s Capital Budget.

The funding will assist in moving the project forward in both the creation and renovation of buildings and areas for residents and visitors. That will provide greater access to different art mediums, including performing arts, visual arts and culinary arts.

Oak Harbor and Port Clinton were awarded $200,000 specifically earmarked for the joint project, with $100,000 going toward improvements to the Greater Port Clinton Area Arts Council’s Art Garage (317 W. Perry Street, Port Clinton) and another $100,000 for Oak Harbor improvements along its riverfront, including site preparation for an amphitheater.

Additionally, another $275,000 was appropriated to Oak Harbor’s existing riverfront development project, which is a key infrastructure gateway for the joint arts project moving foward.

“We are excited about the future of the arts in Ottawa County. While much work needs to be done, this funding is an important step to move the project forward,” said Mayor Quinton Babcock of the Village of Oak Harbor. “We are grateful to Senator Theresa Gavarone and Representative DJ Swearingen for their immense support at the state level in helping to secure this funding,”

Port Clinton Mayor Mike Snider added, “I echo Mayor Babcock in thanking Senator Gavarone and Representative Swearingen for their support. This first phase will assist us in creating a place where small businesses thrive, and our downtowns are destinations offering access to recreational activities and the arts.”

Port Clinton and Oak Harbor formally signed a memorandum of understanding in December 2021 to jointly work together to create a fully accessible arts infrastructure project for Ottawa County. While both communities have independently focused on arts via the Greater Port Clinton Area Arts Council (GPCAAC) and the Oak Harbor Riverfront Development Project (OHRDP), respectively, Mayors Babcock and Snider said that working together makes for a stronger Ottawa County.

“The arts are such an important part of our lives,” said Snider. “To be able to work together to create diverse spaces and experiences for residents and visitors to enjoy is our ultimate goal.”