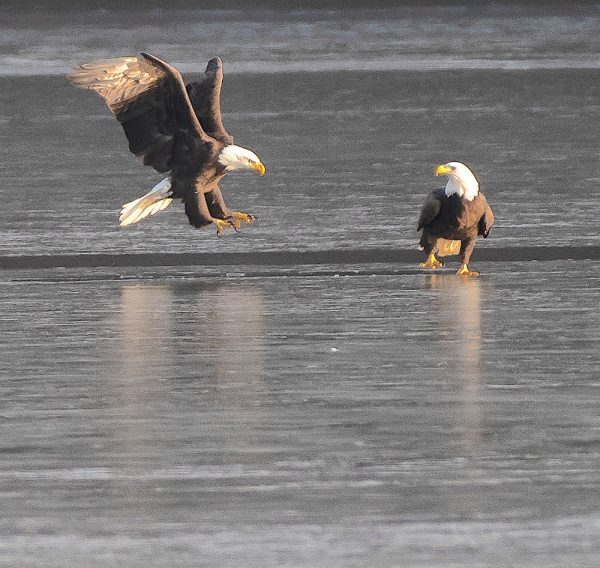 Ohio’s bald eagles expand their hunting grounds in winter to include frozen lakes and rivers in search of fish and carrion, foods of choice for the big raptors. (Ohio Division of Wildlife)

Bald eagle nesting activity increases in Ohio during the winter months, providing additional chances to see these majestic birds hunt, repair their nests, and establish territory, according to the Ohio Division of Wildlife. January is also when Ohio’s bald eagles begin courtship and pair bonding.

Look for these large raptors wherever they can find clean water and abundant food. They can be found roosting along rivers, sitting on frozen lakes, or even in open farm fields.

“Bald eagles are flourishing in Ohio because of improved habitat and water quality in wetlands, and this habitat will only continue to improve through wetlands restored and created through our H2Ohio initiative,” said Ohio Gov. Mike DeWine. “Wildlife areas have also been increased and restored, in part, thanks to funds from our sportsmen through hunting license purchases. These large tracts of wetland habitats provided the necessary space for eagles to nest and raise their young, expanding from only four nesting pairs in 1979.”

Bald eagles in Ohio typically lay eggs and incubate in February and March, nesting in large trees such as sycamores, oaks, and cottonwoods. Meanwhile, frozen lakes and rivers force the birds to expand their hunting grounds in search of fish and carrion, their foods of choice.

All Ohioans can report a bald eagle nest at wildohio.gov or through the HuntFish OH mobile app. In 2020, a nest census was completed in an attempt to locate every active bald eagle nest in Ohio. The results indicated Ohio had 712 active eagle nests, a 153% increase from the previous census completed in 2012, when 281 nests were recorded. Most nests were confirmed on private property, while less than 150 were on public lands. Of those, 43 nests were located on Division of Wildlife properties.

Lake Erie and other large waterbodies host the highest number of eagles because of easy access to food resources. Ohio is made up of two major watersheds, roughly separated by U.S. 30 which runs through north-central Ohio. The Lake Erie watershed, located north of U.S. 30, hosted 396 nests. In the Ohio River watershed, covering the rest of the state, 316 nests were found.

On average, bald eagles live about 20 years in the wild. However, a 28-year-old female was discovered in April 2021 when Ohio wildlife officers responded to a call about an injured eagle. When rehabilitation professionals assessed the bird’s injuries, they discovered it was banded as a hatchling on June 10, 1993 at Reno Beach in Lucas County, making her an astounding 28 years old. The bird was rehabilitated and released back to the wild in June 2021.

The bald eagle was once an endangered species, with only four nesting pairs in Ohio in 1979. Thanks to partnerships between the Division of Wildlife, Ohio zoos, wildlife rehabilitation facilities, concerned landowners, and conservationists its population increased. After much hard work and continued conservation, the bald eagle was removed from the federal list of threatened and endangered species in 2007, and from Ohio’s list in 2012.

Bald eagles are protected under both state law and the federal Bald and Golden Eagle Protection Act, making it illegal to disturb bald eagles. When viewing these majestic birds, remember to respect the bird’s space and stay at least 100 yards away. Disturbing bald eagles at the nest site could lead the pair to abandon the eggs.