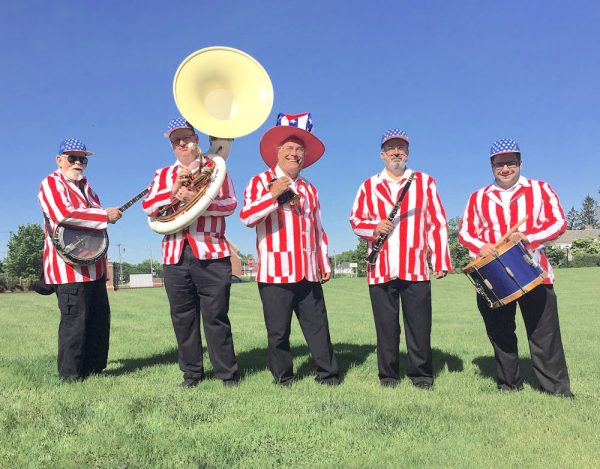 The Firelands Symphony Orchestra’s Around Town Tour concludes with music from Olympic Jazz and Dixieland at RiverFront Live on the MOM Entertainment Stage in downtown Port Clinton on Friday, Aug. 27 at 6 p.m.

The program will feature a variety of songs from the style of jazz pioneers in New Orleans, which were later honed by Chicago-area musicians.

Dixieland music also underwent a popular revival during the 1940s and continues to be adored and played today. The program starts with such favorites as Sweet Georgia Brown, Pennies From Heaven, and What A Wonderful World.

It will also feature a sports-themed set (including the Browns’ Fight Song Hi-O-Hi-O for Cleveland) and a patriotic set (including God Bless America and Stars and Stripes).

Members of Olympic Jazz have performed at SeaWorld, Early Jazz Festival, Guy Lombardo’s Royal Canadians, The Night Owls, and numerous other venues, parties, and events from Toledo, to Pennsylvania, to West Virginia and beyond. They’ve even entertained audiences for the world-renowned “Three Tenors.”

Guests are invited to bring a lawn chair or a blanket and enjoy the beautiful views of downtown Port Clinton. This concert is free and open to the public due to generous grant funding from the Ottawa County Community Foundation.

Be sure to save the date for Firelands Symphony Orchestra’s final summer season concert on Saturday, Sept. 18 at 6:30 p.m. at Paper Moon Vineyards in Vermilion. The concert will feature a program of Americana music performed by the FSO and guest artist Hey Mavis on banjo, fiddle, bass, drums and heartfelt vocals.