One of the Young: The 26-year-old governing an Ohio town 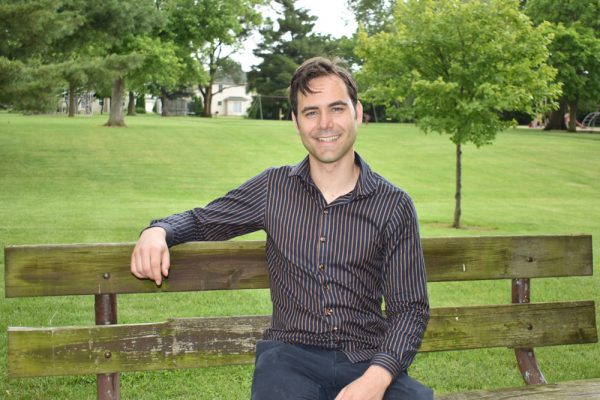 The clock struck 10 a.m. and Quinton Babcock sat refreshing the screen of a computer at the Oak Harbor Public Library.

“This is going to be a mess,” he thought.

During the onset of the COVID-19 pandemic, Oak Harbor Mayor Quinton Babcock, who was 24 at the time, stationed himself in the library to help small business owners apply for the Ohio Small Business Relief program.

The clock read 10:01 a.m. The application portal had opened, then crashed.

“It’s 10:45 a.m. It’s back up and we’re sitting there doing it all,” he said, as chaos followed while business owners ran back to their shops in search of required documents.

Babcock helped small businesses obtain over $200,000 in grants throughout the COVID-19 pandemic.

“That’s because I know how to write grants,” he said. “I didn’t know how to do it before. I just figured it out.”

The can-do attitude of Mayor Quinton Babcock, now 26, is no surprise given he is one of the youngest serving mayors in the country. He leads the Village of Oak Harbor with a population of 2,700, comprised of those mostly double his age.

As political polarization has caused many Americans to turn away from politics, Babcock stands out for his youth and commitment to public service that started at the age of 19.

He first ran for a seat on the village council where he chaired the Finance and Purchasing Committee and the Parks and Recreation Committee— all while working toward his bachelor’s degree in economics, math and disability studies at the University of Toledo.

The Oak Harbor native said his interest in politics and the news cycle started years before he became a council member. Babcock tagged along with his mother to village council meetings while members debated a re-negotiation of a waste contract.

“The rest is history,” he said.

Born in Ottawa County, Babcock spent a stint of his early childhood years in South Carolina when his father enlisted in the Marine Corps. He returned to Oak Harbor at 10 and has called it home ever since.

As a teenager, he worked at a local computer store where he focused on creating marketing campaigns involving mass mailers and managing social media accounts. Serving on the council provided the perfect opportunity to transfer his marketing skills to the community, he said.

Babcock, who was 19 at the time, said he had no specific reason for running— just his own personal interest in engaging in the community. He said his attitude of “just figuring it out” and open mindedness made it an easy transition to public service.

Babcock arrived on the council with no agenda, focusing solely on learning as much as possible. He now steers the council meetings, sitting at the center of a half circle of tables, calling the meeting to order and listening to reports from his colleagues, many years his senior.

“I’ve been very lucky,” he said. “There’s been very few people or times when I really felt like people were saying ‘Oh yeah, Quinton’s too young. He doesn’t know what he’s talking about.’”

“He’s had a lot of interest in the community,” Hall said.

“Talking to him it’s like he’s an older person in a young body,” Hall said.

He described how Babcock has opened up dialogue with state representatives. On one issue, Babcock contacted state officials after Ohio suspended fishing licenses during the pandemic.

After three years on the council, a shakeup in 2018 created a new opportunity for Babcock.

The former mayor of the village resigned and the former council president pro tempore, Don Douglas, became mayor. A few months later, Douglas won a county commissioner race in Ottawa County, leaving the decision of who was to be the next mayor in the hands of Babcock’s fellow council members.

They chose Babcock, who later that year ran unopposed to keep the seat.

“There’s really not a lot of interest sometimes on these local seats,” he said of local politics.

His transition to the leadership position was not easy. While working to complete his master’s degree in economics, he also had to face staffing changes when two of the three positions that report to the mayor—the chief financial officer and the police chief— saw changes.

When the police chief retired and the sergeant who was in line to become the next chief obtained a position elsewhere, the responsibility fell to Babcock to find a replacement.

“I was really in charge of making all these hires that didn’t have clear successors,” he said. “That ended up being really difficult.”

In March 2020, one year into his term, a global pandemic hit.

Babcock fell back on his marketing skills and focused on communications. He created infographics, wrote memos and posted videos on his Facebook page with updates about the pandemic.

He also continued following his personal directive from when he first joined the council: Earning. He stretched his skillset to write grants such as the Ohio Small Business Relief Program, talk to legislators and manage projects focusing on helping businesses in the village.

“Mayor Babcock has a broader mindset of still doing the small hometown stuff, but also what can we do to move forward and to keep Oak Harbor competitive,” said Oak Harbor Police Chief Eric Parker, who was promoted to the position when Babcock was mayor.

Parker, who has worked in Oak Harbor since 1999, said they have a good working relationship.

Looking to the future

Babcock said he is focusing on community planning and economic development for the rest of his term that ends in December 2023. He referenced recent efforts to establish an arts corridor in collaboration with the City of Port Clinton to provide the community with more opportunities to engage with art in public spaces.

He credits the progress he has made to relationship building between himself and state level officials and the village’s residents.

Babcock encouraged young people interested in public service to get involved in their communities by joining zoning boards or serving as commissioners.

“I really think local government is what defines the space you live in,” he said. “You frequently need new perspectives in that and you need essentially representation of different perspectives to move that forward and that’s where I think there’s a real opportunity for young people.”

Babcock’s answers reflect his community-focused spirit when asked about his long-term goals: Get more money for Oak Harbor and complete an economic development plan.

“I think a lot of people who are in local government . . . end up working for themselves,” he said. “I really focus on working for Oak Harbor.”

Rachel Looker is a graduate student at American University where she is studying investigative reporting and wrote about Mayor Babcock for a profile writing class.