Marine Private Isaiah Zapata received a rousing welcome home as the City of Port Clinton ferried the 18-year-old from City Hall to his Second Street home on Saturday, Jan. 12, riding in  a parade of Port Clinton fire trucks and emergency vehicles, lights flashing and sirens wailing.

“It was pretty amazing,” said his mother, Michelle Rodriguez. “Isaiah will be home for 10 days before heading back to the Marine Corps Base Camp Lejeune, a 246-square-mile United States military training facility in Jacksonville, N.C. The base’s 14 miles of beaches make it a major area for amphibious assault training, and its location between two deep-water ports allows for fast deployments.

Rodriguez, a boat detailer for Happy Days Boating in Port Clinton, was asked if 13 weeks of basic training had changed her son, who graduated from Port Clinton High School last summer.

“Isaiah has always been a good kid,” she said. “He has never had any problems, but now he seems more disciplined. His second morning home, Isaiah asked why I didn’t wake him up early so he could help me clean the house.” 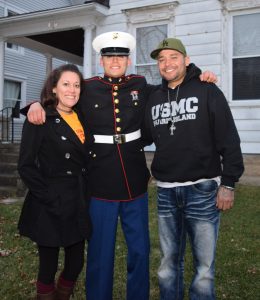 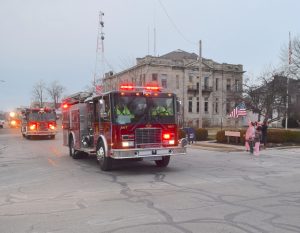 Operation Bright & Loud welcomed home Private Isaiah Zapata of Port Clinton on Saturday, Jan. 12, waking up his West Second Street neighborhood with a parade of Port Clinton fire trucks and emergency vehicles with lights flash. The route from Port Clinton City Hall to downtown Port Clinton was lined with groups of flag-waving residents. Delighted to see him were his mother and father, Michelle Rodriguez and Hondo Zapata.  (Photos by D’Arcy Egan)