The Ottawa County Agricultural Society recognized Rich Petersen, Jr. as an Outstanding Fair Supporter recently at its 4th annual Midway Extravaganza fundraiser at the Ottawa County Fairgrounds. Petersen is the son of Dick and Louise Petersen, of Oak Harbor, and is a 4-H and FFA alumnus, as well as a graduate of The Ohio State University.

Once his daughter Emilie joined 4-H, Petersen became a familiar sight at the fairgrounds once again. For the past several years, Rich has spent countless hours on the grounds, maintaining the horse arena, racetrack, wash rack and even working on the driveways. Even though his daughter had aged out of the 4-H program several years ago, Petersen is also instrumental during the week of the fair in helping keep the horse shows going, as well as prepare for the rodeo, demolition derby, and tractor pull.

The Senior Fairboard praised Petersen for all of his hard work at the fairgrounds throughout the year, and especially during the week of the Ottawa County Fair. The board presented him with a plaque of appreciation, which also displayed a picture of him where fair officials and fairgrounds visitors see him the most – on a tractor dragging the arena. 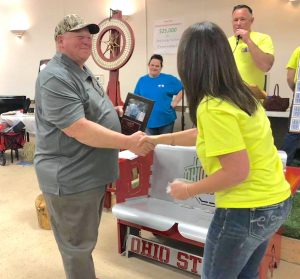 Rich Petersen Jr. was honored recently by the Ottawa County Fair Board as an Outstanding Fair Supporter at its 4th annual Midway Extravaganza fundraiser.