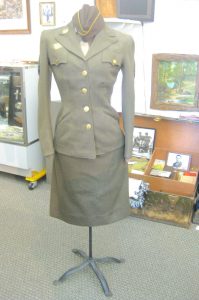 When the Ottawa County Museum resumes summer hours on Memorial Day, new military exhibits will be on display to honor those who gave their lives for our country. Volunteer and Museum Board Member Dave Barth has reorganized Ottawa County militaria beginning with the War of 1812 through Desert Storm and included new artifacts that have never been displayed.

Summer hours begin on Memorial Day and are from noon to 3 p.m. on Tuesday, Wednesdays and Thursdays until Labor Day. The museum is located at 126 W. Third St., Port Clinton. Admission is free and the museum is handicapped accessible. The curator can be reached at 419-732-1039.

Displays in the east wing of the museum now include artifacts related to the Civil War, plus a wall mural of the Battle of Lake Erie painted by Port Clinton High School students under the guidance of teacher Jeanne Radloff and former curator Elizabeth Denney. 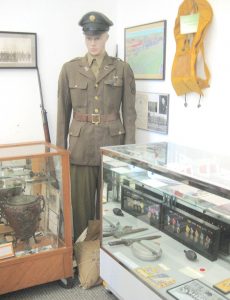 On display in the west wing of the museum are items related the 20th and 21st century military service.

Newly-displayed artifacts include an aviator’s flight jacket from the Cold War era, an Indian tomahawk captured during the War of 1812 and handed down through the soldier’s family, a flak jacket from a Vietnam Marine helicopter gunner and a woman’s WWII uniform.

The contents of the footlocker of Glen Millinger, which were returned to his family after his death in Vietnam, were generously donated to the museum and will also be on display.

The museum’s artifacts also include an M-1 rifle assembled at the Port Clinton Standard Products factory for use in WWII. Items related to WWII Prisoners of War held at Camp Perry include several carvings and paintings produced by POWs during captivity, and a uniform of 1st Sgt.Mike Drusbacky, from Port Clinton, who guarded the prisoners.