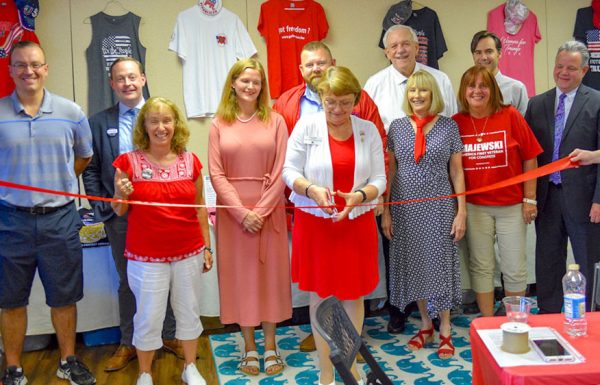 The Ottawa County Republican Party (OCRP) hosted the Grand Opening and Ribbon Cutting of its Port Clinton headquarters on Tuesday, Aug. 16. The headquarters is located inside Commodore Perry Inn and Suites and serves as a resource for information and merchandise.

An overflow crowd packed the room to get a first glimpse of the headquarters and listen to Republican candidates talk about their plans and hopes for the future. Among them were Rep. D.J. Swearingen, 89th Ohio House District; 9th District Congressional Candidate JR Majewski; 6th District Court of Appeals candidate Charlie Sulek, Ottawa County Auditor Jennifer Widmer and Ohio State School Board candidate Sarah McGervey.

Attendees were impressed with the headquarters’ new venue at Commodore Perry Inn, noting its large space and ample parking. Inside, visitors can purchase a variety of merchandise, including shirts, hats, flags, buttons and bumper stickers.

“Once word gets out that it’s here, people will swing it to grab swag and ask questions,” said OCRP Central Committee Treasurer Lisa Slobodzian.

Luke Stinson, 18, was one of the youngest members in the crowd. He hopes to one day run for office, but for now, he is supporting local politics with his time and his vote.

“I’m here because I’m concerned about the direction the country is going,” Stinson said.

The biggest response to the new headquarters was gratitude to Jeremy Fitzgerald, owner of Commodore Perry Inn and Suites, for opening his business to the OCRP.

“Jeremy Fitzgerald has been so good to us,” said OCRP Chairman Jill Stinebaugh. “We wouldn’t be here if not for him.”

Swearingen expressed his gratitude that Fitzgerald created a space for the public to learn about candidates, and Majewski was impressed with Fitzgerald’s generosity.

“I think it is fantastic that the Fitzgerald family has opened up their business to support our local Republican Party. They are leading the way and setting the standard,” Majewski said.