Ottawa County SWCD to share its Platinum Jubilee; Tales of ‘Queen of the Furrow’ and plowing contests 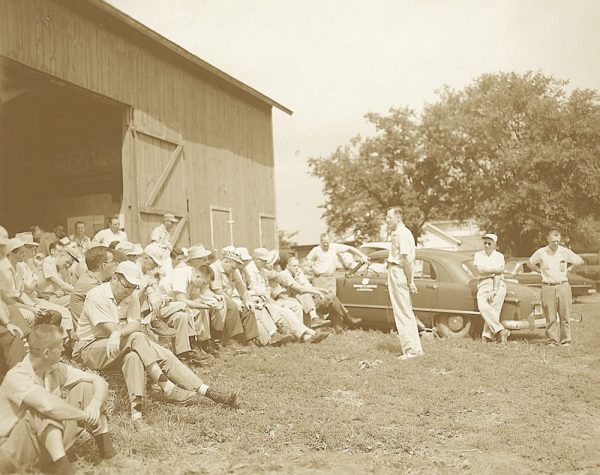 Farmers gather for a Conservation Day in Ottawa County in the 1950s.

These landowners and educators had the vision to establish what has grown into the Ottawa Soil and Water Conservation District (SWCD) and the programs we have today. The district is responsible for the promotion of the conservation and development of the natural resources within the county and for providing assistance to landowners with the planning and applying of conservation practices on their land.

Over this Platinum Jubilee year, the Ottawa SWCD will be contributing more articles to reminisce and educate about the past. Featured will be such tales as the “Queen of the Furrow” and plowing contests. Pictures of floods, snow, soil and stories of the good men and women who made the district strong through the years.

The Ottawa County Soil Conservation District looks forward to sharing its conservation story with you!

The advancement of soil conservation was born out of the dust bowl era of the early 1930’s. Beginning in 1932, a persistent drought in the Great Plains caused widespread crop failures and exposed the land to wind erosion.

In 1935, Hugh Hammond Bennet, the chief of the Soil Erosion Service, testified before congress for funding of a permanent soil conservation agency. As he was talking to Congress, dust particles from the Great Plains darkened the skies in Washington, D.C. President Roosevelt soon signed the Act that created the Soil Conservation Service as part of the USDA.

In those early days, there were no employees and the board of supervisors volunteered their time, just as they do today. The group relied upon the State Soil Conservation Service for technical assistance and by August 1952 a soil planner and soil scientist had been secured to work within Ottawa County.

That September, 10 farmers — including the supervisors — became the first farmers to make applications for service from the district by contributing a $5 fee. With that first $50 and a few donations, the Ottawa Soil Conservation District was off and running.

A quote from the original plan of work set the stage for the relationship with landowners: “Conservation of our soil resources is in the hands of the people who live on the land. Therefore, this program will be no more effective than their understanding and the cooperation given by them.”

Soil erosion and water were the topics of the day. Another quote from the plan of work read:

“Generally speaking, there is much carelessness where tile drains enter ditches and where deep gullies are often formed. Erosion along ditch banks are common where cultivation has been too close to the bank.”

Even after 70 years, these are still some of the main environmental concerns and issues for Ottawa County that the Soil and Water Conservation District works with today.