A bald eagle nest is now a common sight around Ottawa County, where a record 90 nests were counted in a census around the state this year.

A few decades ago, it was a thrill to glimpse the dramatic white head and tail of a massive bald eagle as our national symbol leisurely cruised the Lake Erie shoreline.

In the 1970s, there were only a handful of eagles nests around Ohio. The pesticide DDT had caused the magnificent birds to lay eggs with thin shells that seldom hatched. Thanks to Rachel Carson and her epic award-winning book “Silent Spring,” that detailed the disasters of DDT.

The pesticide has long been banned, but one thing has not changed. Ottawa County is still home to the most bald eagles nests in Ohio, and thanks to thousands of reports from citizen scientists during February and March, 707 bald eagle nests have been documented around the state, according to the Ohio Division of Wildlife.

Not surprisingly, Ottawa County easily led the way with 90 eagles nests, followed by Sandusky (50) and Erie (32) counties. Ottawa County’s nesting success has been awesome, doubling from the 46 nests counted in 2012.

The bald eagle is one of Ohio’s greatest wildlife success stories. The nest census was the first undertaking to discover all such sites in eight years. The results show an increase of 151% from the 2012 census, when 281 nests were recorded in Ohio. The high number of nests represents the hard work and dedication put forth for Ohio’s wildlife.

“The bald eagle is a symbol of American strength and resilience,” said Gov. Mike DeWine. “The eagle’s comeback in Ohio and across the country proves that we can overcome any challenge when we work together.”

“We are grateful to every Ohioan who contributed to this effort and thank those who support conservation of high-quality habitat that kept eagles nesting in Ohio,” said Division of Wildlife Chief Kendra Wecker.

The Division of Wildlife received approximately 2,500 reports from the public for the 2020 census. Wildlife staff, including wildlife officers and biologists, verified nest locations in 85 of Ohio’s 88 counties.

The bald eagle was once an endangered species, with only four nesting pairs in Ohio in 1979. However, thanks to partnerships between the Division of Wildlife, Ohio zoos, wildlife rehabilitation facilities, concerned landowners, and sportsmen and women its population increased. After much hard work and continued conservation, the bald eagle was removed from the federal list of threatened and endangered species in 2007 and from Ohio’s list in 2012. 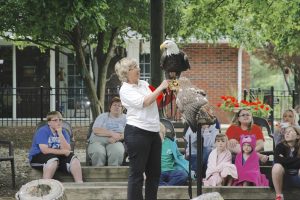 Famous for rescuing injured bald eagles over the years had been Mona Rutger at Back to the Wild, a rehabilitation center Rutger and her husband, Bill, had created in Castalia. Rutger has a flight pen at her center to allow recovering eagles to strengthen wings with short flights. The amazing lady is now retired. The wildlife rehabilitation center is still doing its good work, but needs financial support. To help, visit backtothewild.org (Photo by D’Arcy Egan)

Bald eagles in Ohio typically lay eggs and incubate in February and March. Young eagles leave the nest about three months later, usually in June. The birds nest in large trees such as sycamores, oaks, and cottonwoods near large bodies of water. Fish and carrion are preferred foods.

Remember that bald eagles are protected under both state law and the federal Bald and Golden Eagle Protection Act. It is illegal to disturb bald eagles. When viewing these majestic birds, remember to respect the bird’s space and stay at least 100 yards away from the bird or nest. Disturbing bald eagles at the nest site could lead the pair to abandon the eggs.

As with many of Ohio’s native wildlife species, bald eagles require specific habitat conditions to thrive. Bald eagle habitat protection and research is funded by the sale of bald eagle conservation license plates, income tax check-off donations to the Endangered Species and Wildlife Diversity Fund and sales of the Ohio Wildlife Legacy Stamp. Learn how to support Ohio’s magnificent wildlife like the bald eagle at wildohio.gov/support.

A county list of all verified active bald eagle nests in 2020 is shown below. The first number following the county’s name shows the number of nests for 2020, with the 2012 number in parentheses. These numbers are raw data and subject to change.