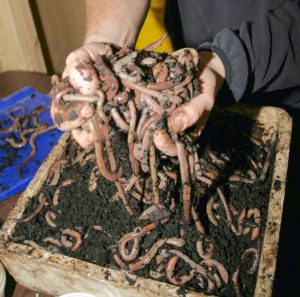 Big juicy nightcrawler were once the favorite snack of Lake Erie’s walleye.

Yeah, the Lake Erie walleye fishing has been pretty darned good for quite a few weeks, right?

For all of you old-timers, like me, there’s one thing we’ve been missing. Worm dirt!

For those of you who remember the walleye fishing in the 1980s, when there were record numbers of charter captains and huge packs of boats drifting north of Niagara Reef right about this time of year.

Once the post-spawn walleye moved off the reefs, fish large and small gathered in big schools in the waters west of North Bass Island and Rattlesnake Island.

Some headed for the West Sister Island area, while others settled in along the drop-offs of the Lake Erie Islands. Those fish were hungry, and ready to chase a weight-forward spinner that was trailing a big, juicy nightcrawler.

Mark I Charters has been bringing home big coolers filled with walleye for weeks now. We’ve been trolling Bandits and Reef Runners and a rainbow of other diving plugs, targeting suspended walleye.

The formula has been fairly simple. Find nice schools of walleye on sonar equipment, troll at certain productive speeds by using satellite-reading GPS, and crank in a few limits of walleye on long fishing rods and level-wind reels.

Many of us missed the good, old days, when Lake Erie fishing guides were mostly casters, chunking and winding with an Erie Dearie, Tom’s Lures, Parish Pea or Gold Nugget.

Trolling for walleyes has been red hot for weeks, a reason why the 160 two-angler teams in the recent Cabela’s Masters Walleye Circuit walleye tournament on Lake Erie a few weeks ago all relied on trolling techniques to catch their fish.

For all of you fishermen who like to set the hook on a walleye on skinny 6-pound or 8-pound test line on spinning reels, rejoice. The drift-and-cast walleye bite finally lit up again last week, to the delight of old-time skippers.

The walleye action was in familiar waters, one to four miles west of the Lake Erie Islands. Some fishermen were catching limits off American Eagle Shoal on the southwest corner of Kelleys Island, too.

While the weight-forward spinners were popular, so were the old-fashioned spinner rigs.

Not the big tandem rigs some anglers like to troll. The small spinner rigs are for casting, with a barrel sinker, swivel, three-foot leader and a small No.4 or No. 5 Colorado spinner. And always a big, old hunk of nightcrawler.

Cleaning up the worm dirt when the day is done isn’t bad at all when you get to cast and retrieve, waiting for those light bites and the chance to drive the hook home with the sweep of a light spinning rod — and put a limit of walleye in the cooler.