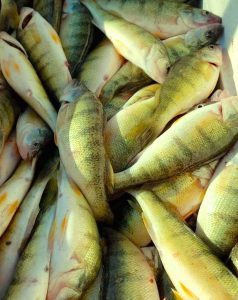 Some jumbo yellow perch are being caught around lake Erie, but the fishing has been slow.

The Lake Erie yellow perch bite is hanging in there after a short burst of angling success a few weeks ago, but these days the fishing has slow. There are a lot of perch being caught from the shallow areas around the Lake Erie Islands and the Lake Erie Firing Zone off Port Clinton and Camp Perry, but also a lot of sorting, as anglers toss back smaller perch and hope for more of the big panfish.

The perch bite has been a very light, as well, which has made the perch fishing even more difficult. The various cans, or markers, around the Lake Erie Firing Range have been offering a better bite this week, with fair reports coming from F Can, G Can and lately A Can, as well.

The walleye fishing has been a bit slower this week, as well. Casters are still working the rocks in close to shore. Anglers really have to work for them, but you can still get close to limit catches while casting harnesses tipped with nightcrawlers.

Trollers chasing walleye are even having a battle with the number of weeds that have flourished around the Western Basin this week. Some fishermen are making the run east of Kelleys Islands to get their fish about 16 miles down the shoreline. They have been picking some walleye up between the Lake Erie Islands as well.

Trolling speeds have been about 2.2 to 2.5 miles per hour running Tru-Trip Diving Planers and spoons to get the job done with lures running 65 to 75 behind the boat. Don’t be afraid to change your bait selection in order to determine what the walleye want that day.