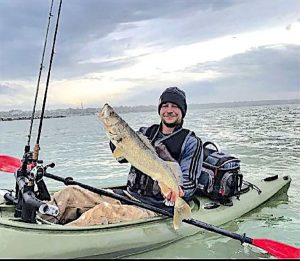 Kayak anglers have been enjoying the near-shore walleye fishing on Lake Erie these days. Brad Gardner took advantage of the solid fishing off Cleveland last week to catch this trophy walleye. (Photo courtesy of the Cleveland Metroparks)

It might sound like a broken record already this year, but the weather patterns we have been having have really made for some difficult fishing. With high water, flooded shoreline communities and nasty easterly winds, it has been extremely difficult to figure when and where we can fish. There are fish for the taking everywhere in Lake Erie. In order for us to be able to catch them anglers will need a little more cooperation from Mother Nature.

Fishermen who cast for their walleye, either anchoring or drifting, were going to the reefs to hook up with a few walleye. Strong winds, though, have dirtied the water and done a great job of foiling those plans, knocking the reefs down the ladder as the best spot to fish. East and west of the islands have become the hot spots for knowledgeable walleye fishermen, depending on the direction of the winds, of course.

Anglers have switched to using a combination of bottom bouncers and worm harnesses. The No. 4 and No. 5 Colorado spinner blades are working best on the walleye rigs. You can lower the spinner rigs to the bottom using weights ranging all the way up to two ounces.

Three of the best spots that savvy anglers have relied on have been west of Catawba and west of South Bass and Kelleys islands. Another good spot has been the waters on the Canadian line if you don’t mind taking a little ride. As the winds start to calm, the casting bite will be a lot stronger than the drifting bite.

Trollers have had more of the same conditions as the casters. They have found that going up the middle of the Lake Erie Islands to the west of Gull Shoal, north of Bass Island and north of Rattlesnake Island have been producing nice catches. Bandits have been the diving plug, or crankbait, to tie on your line.

Depending on the depths of the fish, fishermen will want to troll the Bandit back 40 to 100 feet behind the boat. Speeds should be kept between 1.6 to 1.8 miles per hour. West of Port Clinton started out as a top fishing spot this week, but the waters there became quite dingy and dirty towards the end of the week. Hopefully, they should clean up soon so that anglers can connect with th e schools of walleye in that area.

If you have any questions on fishing techniques, lures or fishing locations, stop at Bays Edge Bait & Tackle and ask Shannon or Misty if they have new updates for anglers. Stay safe out there and watch for other boaters. Until next time, keep a tight line!