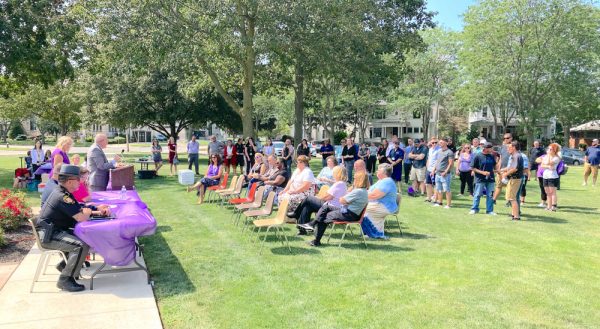 An attentive crowd of more than 75 concerned citizens turned out at the Ottawa County Courthouse on Tuesday, Aug. 31, marking International Overdose Awareness Day and the cold fact that deaths due to the opioid crisis continue to increase in the county and around the country.

In Ottawa County, there were over 50 overdose-related incidents, and seven deaths. These deaths covered a wide range of ages, from 25 to 46 years old, and were both male and female. Six of the deaths were due to fentanyl abuse, and one was methadone abuse.

“Many of the people affected by drug addiction are everyday people like you and I,” said Levorchick. “Maybe they had an injury that lead to their addition. Maybe they tried it just one time, and became addicted. Or maybe they just have an addictive personality.

“We cannot arrest our way out of this,” said Ottawa County’s top cop.

Black silhouettes sit starkly on the Ottawa County Courthouse lawn, representing seven people who died in the county in 2020 from fentanyl and methadone abuse.

Being an addict, or being in recovery, doesn’t mean you are a bad person, said Levorchick, and education is the key to lowering deaths due to drugs. “The stigma has to be taken away. Looking down our noses on someone in recovery has to stop,” he said. “We have to start understanding that our world is not all rainbows and unicorns. We have to get back to loving our neighbors and helping whenever possible.”

Ohio has designating Aug. 31 as a permanent Ohio Overdose Awareness Day to raise public awareness and to remember the lives lost to the epidemic. Unintentional drug overdose is one of the leading causes of injury death in Ohio, surpassing motor vehicle crashes.

According to RecoveryOhio, in January through November of 2020, there were 4,579 unintentional drug overdose deaths reported. This is a 24% increase over 2019. Ohio’s medical and first responder communities attribute the increase primarily to fentanyl, a highly addictive and dangerous opioid.

Earlier this year, state officials approved $2.5 million to rapidly deploy 60,000 doses of naloxone to 23 counties struggling with a high burden of overdoses. RecoveryOhio, ODH, and OhioMHAS are encouraging all Ohioans to consider carrying naloxone to help save a life.