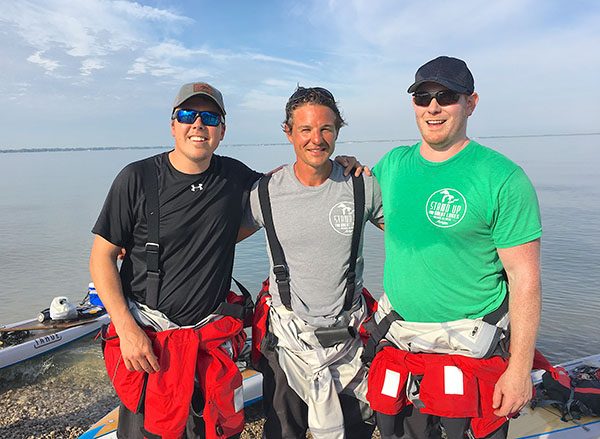 Paddleboarders Kwin Morris, Jeff Guy and Joe Lorenz landed on the shores of Catawba Island last week, braving almost 20 hours of headwinds to finish their 24-hour, 70-mile journey across Lake Erie as part of their “Stand Up for Great Lakes” project

The trip was part of the paddlers’ “Stand Up for Great Lakes” project, intended to raise awareness about environmental issues in the region.

Lorenz said the crossing started off smoothly, but the trio soon encountered almost “20 to 23 hours of straight headwinds for the rest of the paddle,” he said. “Sometimes we paddled as hard as we could and were actually going backwards. Then, at times, during our rests the wind blew us back, losing ground we had already covered.”

The trio traversed international waters and passed by 800-foot freighters and other boat traffic, all in an effort to raise awareness of Great Lakes environmental issues. They begin their adventure at Belle Isle State Park, home of the Dossin Great Lakes Museum and ended at Catawba State Park.

In 2018, the trio crossed Lake Superior on paddleboards and raised $15,000 for the Great Lakes Shipwreck Museum in the process. That trip challenged the men with cold waters and waves from passing freighters.

“We had a current in the Detroit River of eight to ten knots, not to mention the ricochet waves from the shoreline along the river in the Livingston Channel,” says Kwin Morris. “But our biggest nemesis was the headwind. We’re comfortable in 2-3 foot waves, but we want to avoid larger waves as much as possible,” says Morris.

They have now successfully paddled across four of the five Great Lakes. Next up: Lake Ontario.

On the Lake Michigan crossing, they raised $10,000 for the Great Lakes Alliance. In June 2017 they crossed Lake Huron and raised $7,000 for Thunder Bay National Marine Sanctuary. Their 90-mile paddle journey took over 28 hours to complete. Last summer they paddled across Lake Superior in 21 hours. Their 60-mile trip began at Sinclair Cove, Ontario and ended at Whitefish Point, Mich., and raised $15,000 for the Great Lakes Shipwreck Museum.

Each paddleboarder carried all of his supplies on his own paddleboard: food, extra clothes, and straws that filter drinking water from the lake. There were many dangers they faced, aside from hypothermia and fatigue. Un-forecasted 10 knot winds cropped up, requiring the men to paddle twice as hard to literally stay in place.

To give their families peace of mind, they took precautions, such as having two safety boats follow them with an emergency medical technician. They also brought along Emmy Award-winning photojournalist Corey Adkins to capture the event.

“Corey is a master storyteller. He’s already shown us some terrific footage from the paddle, not to mention some was already broadcast live on 9 &10 News,” said Guy.

The men researched Lake Erie to decide where to donate the money they raised. They spoke with Duane Gossiaux, a biologist at Great Lakes Environmental Research Laboratory, who specializes in studying Lake Erie’s harmful algal blooms (HABs), and he directed them to the Cooperative Institute for Great Lakes Research (CIGLR).

“CIGLR is a non-profit housed in the University of Michigan. They are doing spectacular work with algal bloom research and their efforts to safeguard the Great Lakes ecosystem. They are experts in Great Lakes issues, and we were thrilled to have them on board our team,” says Lorenz.

Algal blooms (also called algae blooms) are usually caused by runoff pollution, can impact both marine and human health, and are an annual threat to more than 11 million people through their drinking water and recreational boating, fishing and swimming. The paddleboarders raised $15,000 for CIGLR and their continuing research and protection of Lake Erie surpassing their original goal of $10,000.

“Our overall goal is to help keep the Great Lakes awesome,” says Jeff Guy. “Our hope is that people will join us in donating to this great cause.”

Jeff Gu, 33, is a financial advisor with Merrill Lynch. He also enjoys golf, hockey and fishing. He lives in downtown Traverse City, Mich.

Joe Lorenz, 33, is a personal trainer in Traverse City. When he’s not helping people achieve their fitness goals, he’s up for almost anything involving water, travel, adventure, fitness, or beer.

Kwin Morris, 31, was born and raised in northern Michigan, making him a keen waterman, traveler, and adventurer. He is a middle school science teacher in the Elk Rapids School District.

Corey Adkins is the Special Projects Executive Director for 9 &10 News based in Cadillac, Mich. A gifted storyteller, Adkins has won several awards for the ‘Crossing Superior’ documentary, which recently won an Emmy. In 2018 he won “Best Documentary” from the Associated Press and Best News Special and Special Interest Programming for his filming of the Huron crossing, which can be seen here. He also won a 2015 award on a commemorative Edmund Fitzgerald production.